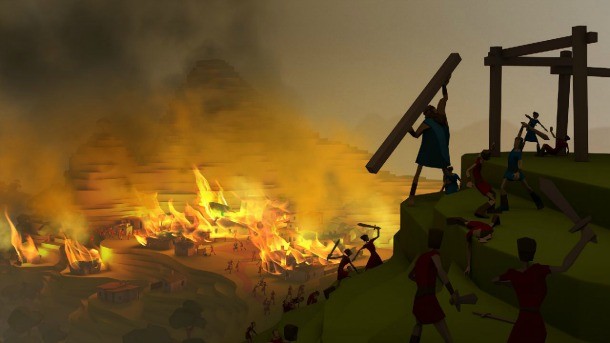 Before Peter Molyneux took the stage at PAX Prime to deliver his keynote, we met with him to tour his latest creation. Godus clearly takes cues from Populous, the Bullfrog game that pioneered the god genre back in 1989, but also shares similarities to strategy titles like Civilization.

Upon starting the game, players are given dominion over a couple and a large swathe of land. To increase your population, you must click and drag layers of the land to make it more hospitable. As you do so your faithful followers will construct new abodes. You can sculpt the land, creating large mountains, deep valleys, wide or narrow rivers, and remove trees as you see fit. Altering the land can have a larger affect on the world as well. If you alter the shores of a region, it can change the tidal pattern, which could affect the winds and weather.

Once your fledgling population reaches 750 people, your civilization comes out of the primitive age and into the bronze age. Much like Firaxis' Civilization, Godus progresses follows the development of human culture, from the bronze and iron ages right up to the information and space ages. Each age requires you to meet a different objective to proceed. For instance, the bronze age isn't focused on population growth like the primitive age; during that era your believers must develop better tools.

When you advance an age, you are receive a card that grants new god powers. Some cards simply give you new tools for sculpting the land and controlling your population. Others bestow great powers like the ability to create earthquakes, meteor showers, or to use the Finger of God to stomp out individual citizens. You can also find these power-granting cards hidden in the world or earn them in multiplayer battles.

For the multiplayer component, Molyneux set out to create a simplistic real-time strategy system that harkens back to the early days of the genre. These matches follow the traditional plan-build-attack approach. Before each battle you can determine how many citizens you want to start with. Bringing a considerably larger force makes it easier to win the game, but the rewards will be commensurately lesser.

The demonstration battle Molyneux fights has a unique type of follower at stake. These are valuable because they bring new skills to your population, and as they cross-breed your citizens will become much more skilled. This particular follower looked to be skilled at procuring resources.

Multiplayer battles occur in instanced maps rather than your home world. The primary resource you must collect and spend in these skirmishes is belief. You earn belief by growing your population, which can then be spent to terraform the land more quickly, direct your soldiers around the battlefield, and enact your godly powers of destruction.

Upon returning to your home world after a multiplayer match, you can put your newfound followers or resources to work. Molyneux says the world is roughly the size of Jupiter, and as you expand your border you will inevitably bump up against another person's civilization. At that point, you can determine whether you want to cooperate to make the world a better place or have an antagonistic relationship.

The big wild card in Godus, of course, is the God of All Gods. Earlier this year Molyneux revealed that the winner of the Curiousity experiment, a Scottish teenager named Bryan Henderson, would be granted dominion over the totality of Godus. So how does this play out?

Basically, Henderson has three tools at his disposal. He can make trivial decisions, like permanently changing the weather of the world. He can rule on moral questions raised by other Godus gods. The examples Molyneux gave were ruling whether or not workers should be given time off during the day or introducing contraception for population control. The third way he can affect the world is by altering the values of particular tasks. For instance, he could change how much belief it costs you to chop down trees.

Henderson will have six months of uncontested rule, but as that comes to a close another god can challenge him to a televised match. If this challenger wins, he or she will then be given a three-month reign to affect change on the world using those same tools.

Players can get their hands on Godus starting September 13, when the Steam early access version becomes available. The game is eventually coming to Android, iOS, and Mac as well.