Ubisoft has had a few bizarre missteps in the media blitz leading up to Ghost Recon: Future Soldier's release. Fortunately, the game's launch trailer plays it pretty straight. The clip shows off some of the game's scenarios and also sets up a bit of its story.

The launch trailer shows off what happens when a missile defense system has to take out a threat in a crowded urban area (spoiler: it's not pleasant), as well as how the Ghosts work together in the field. The game puts an emphasis on high-tech gadgetry, and you'll see remote drones, invisibility suits, and more in the trailer. 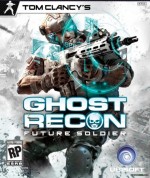