The very first direct-feed gameplay footage of Forza Motorsport 5 was released today courtesy of developer Turn 10 studios. It’s an impressive demonstration of the Xbox One’s powerful new graphics engine, which renders the game at 1080p resolution and 60 frames per second.

The footage showcases the 2012 Pagani Huayra navigating the icy roads of the Bernese Alps circuit, which has been entirely rebuilt since its debut in Forza Motorsport 4. Also returning to the franchise is “the home of British Motor Racing”, the Silverstone circuit. The real Silverstone was laser-scanned during development, and its appearance in the Forza Motorsport 5 is the most accurate rendering of the circuit in any racing game to date.

The career mode for Forza Motorsport 5 is organized into eight leagues, each focusing on a particular type of car. For instance, a league might be specifically for vintage cars, another for sports cars, and so on. Players can choose from a number of career mode events, and can participate in one with a car that meets the event requirements. They can also go back and replay any of these events for credits and experience. Each set of events features its own video introduction with commentary provided by the hosts of the UK version of Top Gear.

Check out the new video, and screenshots below. If you haven’t already, be sure to look over the list of 21 new cars announced for the game. 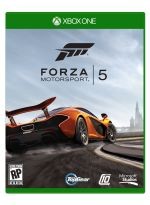