The recently announced Fire Emblem: Heroes brings the series to mobile for the first time. Rather than focus on creating a new world and characters to dig into, Heroes works as a crossover game, bringing together heroes from across several different games in the series.

To showcase which heroes fans will be able to control (and how obscure developer Intelligent Systems is willing to get with its character picks), Nintendo has dropped two new trailers introducing us to the crossover cast. The cast is currently loaded with characters from last year's Fire Emblem: Fates, but also includes characters from games not yet released in the West. You can watch both trailers below. 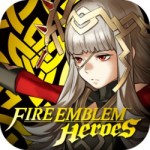