A world of choices await Hunter and gamers alike in FIFA 18's The Journey story mode.

EA debuted The Journey in last year's FIFA 17, which introduced players to up-and-coming rookie Alex Hunter. This time around, Hunter will be a little less starstruck, but no less motivated, garnering the attention of some of the top soccer teams around the world. EA's plans for the mode sound equally ambitious, with the inclusion of more player customization, voice and mo-cap performances from a number of real-life stars (including cover athlete Cristiano Ronaldo), and increased player choices that will drive Hunter's narrative. This year's Journey mode also contains multiplayer matches and smaller stories featuring other playable characters who Hunter meets in his globe-spanning career.

The Journey was one of the highlights of last year's FIFA 17, so we're looking forward to the improvements EA is prepping for this year's installment, as well as seeing where Hunter's story takes him next.

FIFA 18 comes out on September 29 on PlayStation 4, Xbox One, and PC. A version of the game that does not include The Journey mode will be available on Nintendo Switch, PlayStation 3, and Xbox 360. For more on The Journey, check out Kato's detailed breakdown. 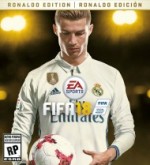