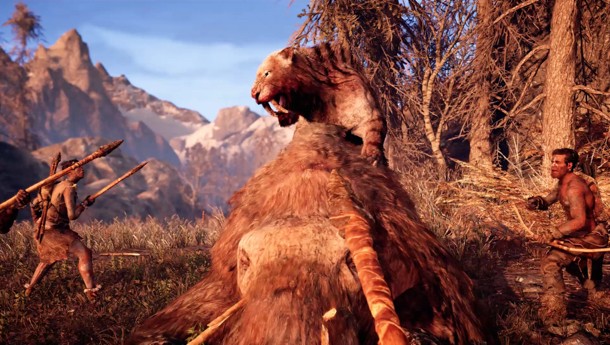 When I played (and loved) Far Cry 3, it was in spite of some glaring flaws. I adored the open world, but the story was a gaping hole in the experience. Except for Vaas. Oh, Vaas.

Far Cry's writing has always tended toward the summer blockbuster. The characters are often caricatures, wreaking havoc across the lush, far-flung locales for which the series is known. Despite menacing characters and perilous journeys, the franchise has never embraced its potential gravitas.

Ubisoft has long envisioned Far Cry as "Skyrim with guns." It's never quite reached that lofty goal, but shedding the firearms has done wonders for pushing the series toward its ambition of competing with Bethesda's best.

In an hour of hands-on time with Far Cry Primal, it feels like Ubisoft could finally be bridging the gap. The setting and characters are foreign enough from life today that it's much easier to suspend disbelief. The struggle for survival in a harsh land dominated by predators feels like weightier subject matter, giving Ubisoft the credibility to take itself seriously. 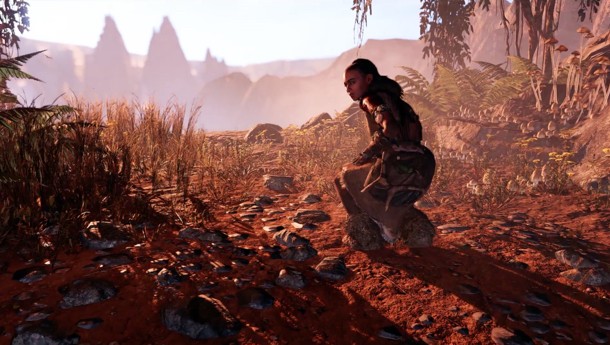 I expected Primal to feel like a quick cash-in. I came away impressed from my brief time with the game and eager for more.

The game opens with the protagonist Takkar on a hunt with a few of the remaining Wenja tribe, many of whom have split off to seek more fertile, hospitable ground in the hidden land of Oros. Stalking a mammoth isn't sport. It's survival. And thankfully, all goes well. Almost.

I'm reminded immediately that there is a food chain, and humans are not anywhere near its apex in 10,000 BC. Shortly after felling what would have been meals for days, the party is caught off-guard by a sabretooth tiger.

The rest of the party is killed, and Takkar is wounded. After a brief introduction to weapon crafting and hunting, I make two critical discoveries: a woman, Shayla, a member of the far-flung and scattered portion of the Wenja and the land of Oros, where the core of the game takes place. Finding Shayla is our first clue as to what happened to the Wenja and proof that they reached their goal. She serves as guide through the early going, helping explain what happened to Takkar's people after they reached Oros.

Far Cry Primal sets up a three-way struggle for dominance. The Wenja have been routed, their home in Oros destroyed. Throughout the game, players not only face aggressive wildlife, but members of the blood-thirsty Udam and the advanced, power-hungry Izila tribes. Ubisoft says that the latest outing is comparable in size and density to Far Cry 4. 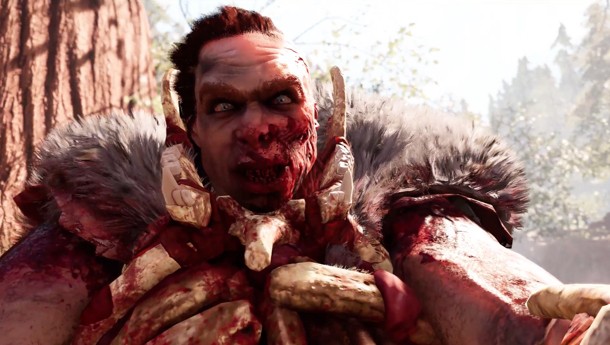 Throughout the game, players rescue members of the tribe and build up the village. When you recover specialists in hunting, gathering, and other skills, each will unlock new ability sets, the village will grow, and the Wenja will start to take control of Oros.

The story doesn't seem terribly complex, but its trappings are enthralling. Ubisoft's commitment to the setting is impressive, as the publisher has enlisted the help of linguists to craft a multi-dialect language based on our understanding of real proto-Indo-European. This sells the experience in a way I don't think that English dialogue would.

The core mechanics of the Far Cry series, the stealth/awareness indicator and tagging enemies in particular, are intact. This time out though, there are no sniper rifles. Long range kills are possible with a long bow, but your options are limited without firearms. Far Cry Primal offers something so much more interesting.

One of Far Cry Primal's defining features is the ability to tame wolves, bears, tigers, badgers, and birds. Once you tame beasts, you can bring one into battle at a time. You can also swap on the fly to adapt to the situation. Use an owl to tag enemies from the sky and get the lay of the land. Bring a wolf in to send after lone enemies, which keeps you hidden from discovery. Once your cover is blown, switch to a bear to tank while you pick off the few tribesman remaining.

Using animals as weapons is satisfying. But more importantly, it feels different and authentic to the setting. You'll be able to tame rare versions of some creatures through hunting quests. Outpost liberations return, but this time many carry the benefit of freeing Wenja to build up your village.

While I only had an hour with Primal, it's clear that Ubisoft has made smart adjustments to make the game unique while still retaining the core DNA that makes Far Cry so enjoyable. I'm eager to dive back in on February 23 when it arrives for Xbox One and PlayStation 4. The PC version will be out on March 1.

Note: The PC release date has been corrected.