Digital card games appear to be a go-to location for developers in 2014, many supported by free-to-play monetization models that inevitably conjure up conversation regarding “pay-to-win” and other pitfalls of aggressive monetization that have demonized mobile card battlers.

Faeria is the Kickstarter project of Abrakam Games, a four person (and one chicken) team out of Belgium that’s been working on the project for years, from concept to the current web-based client. A Unity client is on the way, with a full release projected to be a few months out. The game is available for play now via early access or buy-in-beta.

The turn-based Faeria falls within the digital card game (DCG) genre, but distances itself from the rest of the pack with a buy-to-play model and a significant use of mechanics associated with board games. The buy-to-play model presents its own challenges because players must play to earn their cards.

While this doesn’t necessarily translate to a strict advantage from a long term player, it does mean that more options will likely be available. Abrakam has taken various steps to try and balance things out, but be aware that the buy-to-play model is not without its own hurdles when it comes to competitive collectible card games.

Players must make decisions regarding resource acquisition each and every turn, all while paying attention to the ever changing game board. Players can freely use actions to gain gold, cards, and place tiles on the map, but the board itself houses the essential resource that spurs players to expand and control the terrain - Faeria.

Some decks opt to ignore Faeria completely and go directly for the opponent, while others seek to gather as much as possible in order to play strong creatures and spells. Many decks fall somewhere in between. No game is the same, as the environment is created and destroyed over the course of gameplay.

Unit abilities like flying and aquatic are important in Faeria, as terrain mobility is an important aspect of the tactical gameplay. Faeria also includes day and night elements that add an additional layer of timing and strategy.

One of the problems that can plague tactical games are long turns. Faeria’s action system and game clocks limit turn time so that there’s still plenty of thinking, but the game never slows to a crawl.

Faeria is a tactical treat wrapped in a collectible card game shell. Players that spend a lot of time with the game will likely gravitate towards the ladder system and ranked play, while casual players can play unranked matches and spar with friends. 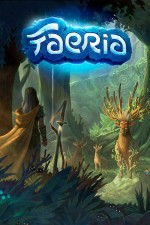