I spent time with Peter Molyneux today to learn about Fable III, the latest in his popular series. He’s hardly a closed book, and many aspects of the game have been divulged in the past. But, at E3 Molyneux demonstrated a variety of new gameplay elements and answered a number of questions.

Fable III operates in two halves. The first half is similar to the experience we’ve had in the first two games, with plenty of exploration, combat, and relationship building. At roughly the halfway point of the game, you’ll ascend to the throne and become king. Then the game shifts. As the king, you’ll turn your attention to matters of a more royal nature.

As Molyneux reminds us, there are plenty of games where we end up as king, but we never get the opportunity to see what happens after we get the job. Our heroes are great at dispatching thousands of vile enemies, but can we balance a budget, put a chicken in every pot, and a horse in every stable?

When Fable III opens, the land of Albion is suffering under the tyrannical rule of its king. He’s made dubious decisions, the country is starving, and the people are taxed into poverty. Albion yearns for a new leader, and whaddaya know, you are just that guy (or gal). Your hero is related somehow as a descendant of the hero from Fable II, and Molyneux went so far as to explain that Fable III will read existing Fable II data from your 360, and alter elements of Albion in response to your actions in the previous game.

Fable III has no experience points or leveling. Instead, your progress is measured by the number of followers you’ve amassed in your journeys. Molyneux indicated two ways you’ll earn followers. The first is by personal interaction. You can woo townspeople through simple interactions, like waving, touching, gesturing, and, for some deranged people, farting.  Go figure. You’ll also earn followers through heroic acts.

By the time you’re in position to overthrow the king, you’ll need almost a quarter-million followers.  Fortunately, you don’t need to recruit them individually. Once your followers have recognized your greatness, they’ll start spreading the word on your behalf. As a town starts to flip allegiances to you, the town’s banners will switch from the king’s to your own, and you’ll be followed in the streets by adoring fans.

Fable III’s magic system has been overhauled in a fascinating way. You’ll map a spell to each of your hero’s gloves. Molyneux used a hero with a fireball spell on his left hand, and a force push type spell on his right hand. When magic is used, your hero will shoot off a single spell that combines the two spells. In one sequence we saw, Molyneux’s hero was surrounded by hobbes. His magic spell blasted the hobbes with fire, and pushed them several yards away from the hero.

Magic spells become more powerful the longer your hero charges the spell before releasing it. In the heat of combat, it’s tough to charge the spell for very long as you’re being set upon by enemies. But, if you can manage it, you can power up your spells long enough to do major damage, no matter how early you are in the game. If you’re one of the 10 million people who played one of the first two Fable games, you know that your physical appearance changed based on your decisions. Evil characters grew menacing features (horns!), and goody-goodies gained an aura of brightness. Now, the same thinking has been applied to your weapons. Your sword’s appearance will morph and evolve based on your actions. Every time you die, your blade will gain a notch. As you kill, your sword gets longer. If you go on a killing spree, wiping out a village of innocent people, your blade will curve and bend, with horrifying hooks growing out of the blade. In total, there are 88,000 weapon variations, each which can grow and evolve based on your actions.

Remarkably, Molyneux indicates that you can sell your weapons to other users. The money used in this transaction might be real money, not in-game money. It’s a discussion point he’s negotiating with Microsoft.  I love the idea of dedicated Fable players offsetting the cost of the game by selling their weapons.

Once you take over the throne of Albion, the game takes a sharp turn. Your days of slaughtering waves of hobbes are largely over. You’ll need to start dealing with the demands of the throne. All those miserable peasants who helped you reach power now want something. Will you make good on all the promises you made when you were campaigning for the throne? What if your kingdom doesn’t have enough money to cover your promises? Will you tax the people to raise funds? What if they’re already starving?

Further, you’ll need to hold court with your citizenry, to deal with their problems. Even if you’d rather be roaming the countryside, you’ll have to do some kingdom management. Molyneux suggested that your hero’s decisions may easily end up turning you into the same tyrant that the previous king was.

Want to get away?  As king, you can’t just walk the streets. A popular king will be mobbed. A hated king will be attacked. And, for certain, your days of taking jobs from the blacksmith are long over. After all, you’ve got a regal bearing to maintain. If you insist on hitting the road, you’ll need to go in disguise, where you can eavesdrop on people talking about you and your decisions.

In Fable II, we saw baby steps toward cooperative play.  Fable III delivers fully integrated co-op. Now, both players can move and act completely independently. You can trade items between each other. You can even, gulp, get married and have kids with your co-op partner.

The success of Fable III rests with the second half of the game, once you take over as king. If it feels like detailed kingdom management, I’m not sure people will like it. If Molyneux’s team can make it fun and engaging, it’s a great opportunity to show us what happens when after our warrior takes off his helmet and picks up a crown. 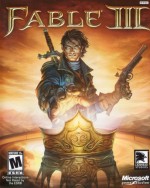