Epic Mickey 2 moves in a number of new directions, but usually away from what I liked in its predecessor. Tedious puzzle rooms have replaced longer platforming levels. While Mickey and Oswald still jump from place to place, the focus is almost always on fetching some hidden object or opening a door. Solutions are rarely intuitive, and wandering from place to place before stumbling upon the answer is common. Regular vocal cues do little to alleviate the problem, like telling me to “go over there” without specifying where, or look “by the entrance” in a room with multiple doors.

Return to Wasteland for another adventure with forgotten Disney toons

The whimsical voice acting is strong, but the sung musical numbers are flops

Frustrating level, quest, and boss design all pull the  game down 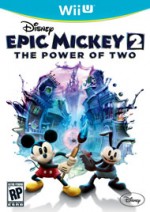