The Berserkers have a way to bring the world back to life by using their "world hearts," which are massive plants that can revitalize an area. They travel the world, looking for locations to plant them. With this mana-based approach, they refuse to use any kind of technology, which means you see them using swords, crossbows, axes, and magic instead of plasma rifles, shotguns, and flamethrowers like other factions.

You can learn more about the Berserkers and Elex below.

Elex is set to release on PlayStation 4, Xbox One, and PC in the third quarter of this year. 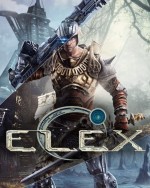