While previous installments have featured legions of monstrous foes, Earth Defense Force 5 promises a new humanoid threat that is sure to up the ante.

Earth Defense Force 5 is expected to launch in Japan this year. 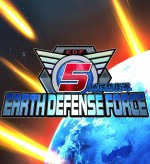