The 20th Anniversary Edition Brings The 1996 Game To Modern Consoles

Gearbox is bringing Duke Nukem (and his original creators) back for release on the current generation of consoles.

The package will have the original game plus some new content. Bonuses include a new episode with eight new levels designed by the original designers, new music from the original sound designer, and commentary from the developers. You can also play the game in the original 1996 visuals, or toggle in real time to play with updated visuals using Gearbox’s "all-new 'True3D Rendering' mode". 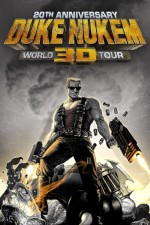