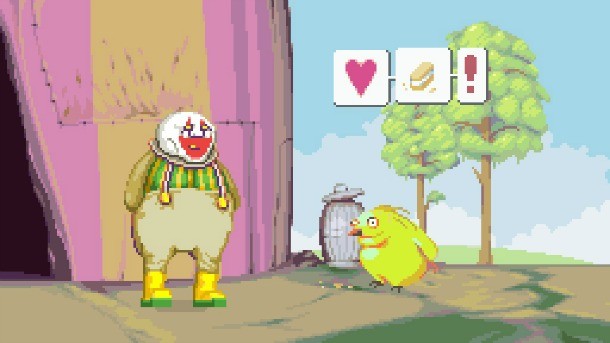 The indie game, Dropsy, developed by Jay Tholen, has been picked up by publisher Devolver Digital. Dropsy’s Kickstarter campaign has been tremendously successful, collecting over $20,000 in donations – enough to reach its first stretch goal.

Those who suffer from coulrophobia, fear of clowns, are probably unnerved by the image above. Relax. That clown is Dropsy, an innocent, but misunderstood soul who harbors only the best intentions. He first appeared in a “choose your own adventure” game, now archived on Tholen’s website.

This upcoming incarnation of Dropsy is an open-world adventure, in which players control the titular character on a quest to restore his good reputation after a deadly fire at the family circus. This world hosts a variety of geographically-based puzzles, eccentric NPCs, and useful items, which Dropsy stores in his elastic waistband.

Dropsy is an intriguing experience in many ways. The game is nearly devoid of text, and characters communicate with Dropsy using visual symbols rather than dialogue trees. The Kickstarter also notes that, while Dropsy’s speech sounds like gibberish to other humans, animals can understand him just fine. 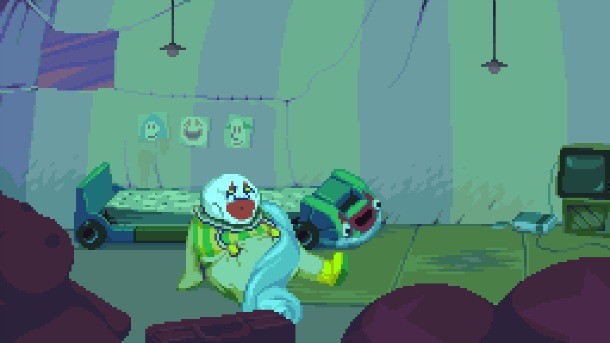 Although its dialogue system is simple, the game’s story seems surprisingly deep. As they roam the world, players may uncover additional details and clues about Dropsy’s past. If players want to delve even deeper, an optional mechanic lets them explore the Dream World while Dropsy sleeps. Trips to the Dream World are five minutes long, and the bizarre settings can reveal further information about Dropsy’s past or even hints relating to events in the game’s overworld.

Dropsy's Kickstarter funding period is almost over, with four days left to snag the remaining backer rewards. These include signed concept art, and having an NPC of your own design in the game.

Dropsy is planned for PC, Mac, and Linux in October 2014. Check out the teaser trailer, and some screenshots, below.