Before developer 5th Cell introduced clever word play in the hit DS game Scribblenauts, the team released a title on the handheld that requires a similar sort of interaction and creativity—Drawn To Life. The platformer allowed players to create their own hero and level elements using the stylus as a drawing tool.

Planet Moon Studios is now taking over the Wii version of the next installment, Drawn To Life: The Next Chapter. As the title implies, the game picks up where its predecessor left off. The Raposa (cute fox-like creatures) are restoring their village after the Raposa kleptomaniac, Wilfre, stole the Book of Life and spread darkness and destruction across their world. The Book of Life goes missing once again, leaving it up to you, the Creator, to create a new hero and track down the thief.

This opens up a virtual easel of sorts reminiscent of Microsoft Paint that requires you to draw using the Wii Remote. Players are encouraged to hold the Wii Remote as they would a paintbrush to execute their creations. Drawing in the air, free hand, with no direct contact with the surface you’re drawing on is as tricky as it sounds. Thankfully there are tools to help.

On the left side of the screen your tools are organized into four tabs: Draw Tools, Stamp Tools, Line Tools, and Fill Tools making what would be a free hand nightmare such as creating a perfect circle and coloring it in a breeze. There are also templates available to help guide your creation, helpful for those of us who possess the artistic prowess of a kindergartner. I created an angry little green monster with spots as my hero. It’s entirely up to you whether you want to draw a person, a green goblin, or something downright inappropriate, and it’s just as fun to watch your creation traverse across the game’s world.

You first gain control of your creation in Raposa Village, the central hub that serves as the gateway to each of the worlds. The first accessible world is Jangala, which houses six jungle-themed levels. Jump into a level and you’ll be presented with a list of objectives that can include locating a missing Raposa, finding book pages, or picking up ingredients for the village chef.

As you explore each 2D level, you’ll come across dotted lines in the shape of a missing object. Walk toward the nearby easel on screen and the drawing palette will open. The game not only gives you the chance to create heroes and platforms, but will also allow you to decorate the level. For instance, in Jangala you can draw butterflies, lizards, spiders and other decorative elements that add to the overall aesthetic of the levels.

In addition, you design your own utility items such as a monkey tail that attaches to your hero to swing across pegs you create, claws that allow you to attach to walls and scale even the highest of rooftops, or design a vehicle that will help you zoom across levels. These not only help you progress through levels, but help you get hard-to-reach collectables including coins, and stamps that will unlock more designs for your collection.

A new feature in the series is the Action Canvas. Dotted lines in the form of a square or rectangle appear in a level for you to draw in, and your scribbles will react based on the type of ink used. A blue Action Canvas prompts you to draw lines to help you cross a gap in the level, or draw steps that will help you on a vertical climb. A red Action Canvas uses physics ink. Anything created in this canvas will react to gravity and force. A green Action Canvas uses bouncy ink, which turns drawn lines into a trampoline. All of these are helpful in helping the player make it across the level. Sometimes different types of canvases are placed together for you to draw your way across hazardous paths in the level and require a little more thought.

For a quick platforming diversion, the Wii version of the game offers a multiplayer option where two players can compete head-to-head in sports minigames. These can be accessed at Raposa Sports complex in the village. Four mini-games were available in the preview build including soccer, hockey, volleyball and basketball. Players can create their own uniforms and design the equipment used. These entertaining, but short games can be accessed at any time on your own or with a friend.

Without the user-generated art element of the game, Drawn To Life: The Next Chapter as a platformer would be pretty flat. Watching your creations come to life is where the game’s potential lies; however, this is the type of game better suited for a stylus. Between Planet Moon’s Wii version and 5th Cell’s DS game of the same title, it will be interesting to see which will draw the most attention when both release this fall. 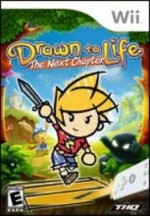