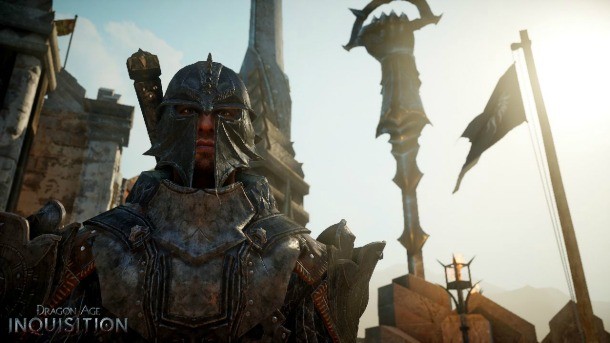 BioWare just gave us a considerable amount of new information about Dragon Age: Inquisition for our September cover story, so the last thing we expected to encounter at PAX Prime was a brand new demo. BioWare exceeded our expectations with a 40-minute presentation packed with new content.

One of the things BioWare wanted to bring back to the series with Inquisition is the sense of dilemma when facing decisions. When each of the options presents difficult consequences, what do you do? For instance, would you help someone gain control of the crown if they pledged to further your cause, even if that decision would cost the current ruler his life? This is the sort of situation your Inquisitor will face in this world of ever-growing chaos.

To show these concepts in action, we jump into the game as he Inquisitor and his party of Varric, Vivienne, and Cassandra are on the outskirts of a Ferelden town called Crestwood. The party has to return to the region because another rift has opened right off the coast of the town. A splinter faction known as the Red Templars, who are essentially Templars who have taken to using Red Lyrium, is threatening the town for unknown reasons. The player could abandon the town altogether, but doing so wouldn't help aid the cause of the Inquisition. Should you choose to participate in the counterattack, you still need to make several tough decisions. 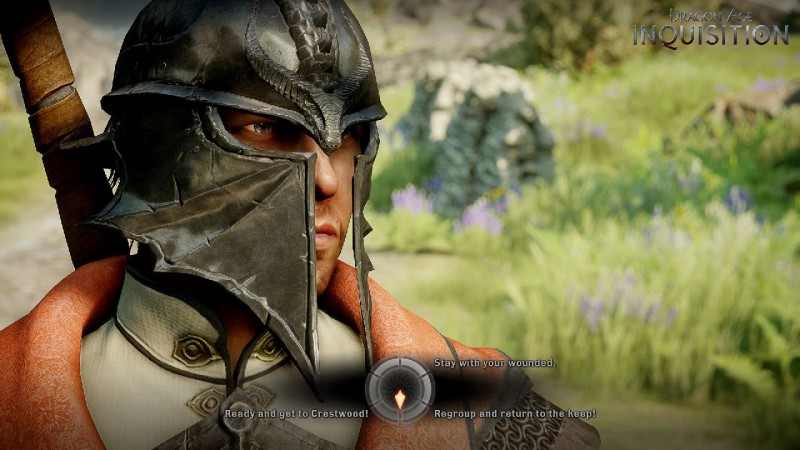 A group of wounded soldiers are gathered nearby with a small force of capable fighters. They report that the town is under attack, and that the Red Templars are close to breaking into the keep as well. As the commanding officer, you need to decide the best course of action. You could have these fighters stay to protect the wounded, which would boost morale but require you to move hastily to repel the invading forces in both the town and the keep. Doing both is very challenging, so odds are you would lose one or the other. You could instruct the soldiers to fortify the keep, and deal with the town assault yourself. This approach would leave the wounded to parish. Another option would be to send the troops to the town and deal with the keep yourself. The fifth and sixth choices would be to concentrate all of your forces into either saving the down or protecting the keep. If you lose the town, you lose all of the missions available in the town. If you lose the keep, you lose a valuable asset in your quest to repel the demons entering the world through the breach in the veil.

The BioWare rep playing the game goes all in to save the keep, much to Varric's chagrin. Your choices in these deciding moments will either test or strengthen your relationship with your companions; don't expect everyone to agree with you at all times. 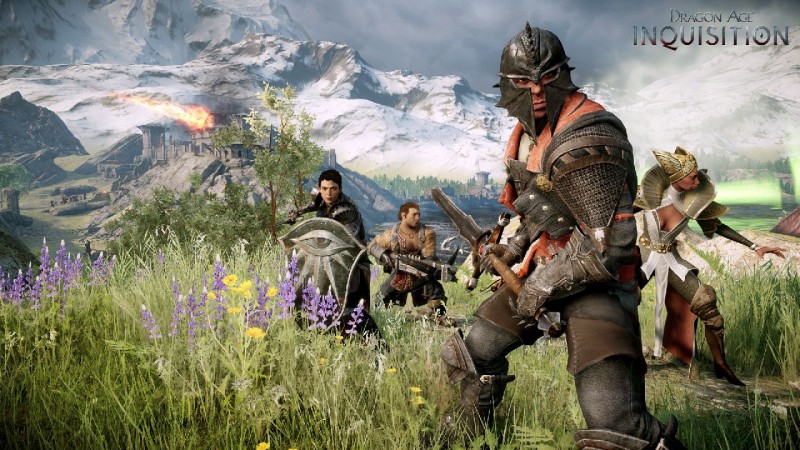 Moving up the hill to the keep, lead designer Mike Laidlaw points out the implementation of the ANT animation system borrowed from the EA Sports label and DICE. As the Inquisitor moves up the hill you see him lean into it, and trudging through the mud near the shore his movement is visibly hindered.

Before reaching the keep the party passes the several Red Templar boats parked on the shore. The player could choose to ignore them, but the BioWare rep decides to torch them with Antivan Fire, which cuts off their escape. Mages could also burn them with a flame spell.

Entering a cave underneath the keep, the player lights a torch with an enchanted flame called veilfire, which burns eternally. This magical light also has the ability to reveal ancient markings on cave walls, but the party doesn't have time for archeological investigations. They catch up to the Red Templars attempting to breach the keep, and combat ensues.

The action is fast and furious, as the Inquisitor uses a Scorpion-like hookshot to drag enemies into his sword's radius, and then finishes them with brutal swings. The combat doesn't scale in Dragon Age Inquisition, so if you return to an area at a much higher level than you were before you can make quick work of the region's enemies. On the flip side of that coin, every area has more difficult threats that you won't be able to defeat your first go around, so tread lightly.

These Templars are accompanied by a towering pet behemoth with a thick layer of armor that prevents the party from taking him down. Cassandra uses her shatter armor skill to expose the demon and blows her war horn to keep its attention, which gives the rest of the party a window to focus its attacks on the chink in the armor. 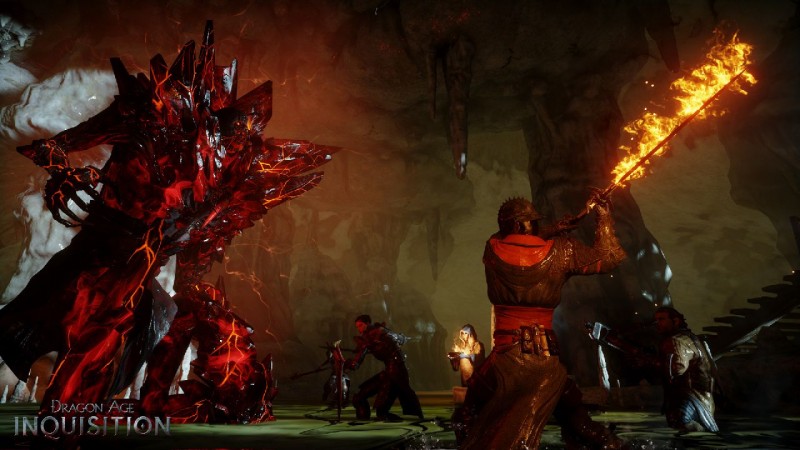 After the fight the party's health doesn't immediately recover as it did in previous games, so the Inquisitor drinks a health potion. BioWare says players will have a finite number of potions, so you need to use them judiciously during the course of an adventure.

With the onslaught repelled, the party heads to the town, but it's too late. Charred corpses litter the ground; it appears there are no survivors. Dejectedly, Varric kneels down over the slaughtered innocent - it's clear he thinks the player made the wrong decision.

From here the demo jumps to a desert region in western Orlais. During the Second Blight, the Wardens built large keeps to repel the demons in this area, and it was once a research hotbed for the Tevinter Imperium. The party has traveled here to drive out a cult known as the Venatori, which opposes the power of the Inquisition. To make the final assault easier, they have poisoned their wells and picked off venturing parties to weaken their numbers.

Looking onto the horizon, Varric mentions that he sees something worth investigating in the distance. Party members will occasionally point out areas of interest to you, but Laidlaw says not everything will be blatantly told to you. Exploring these regions will allow you to uncover many secrets. If you stumble upon a cave, don't worry about long load times. BioWare hasn't separated these areas from the rest of the world, so you can seamlessly walk in and out of them at any time.

Venatori soldiers are patrolling the area outside the keep gates, and they don't immediately engage the Inquisitor once they spot his or her party. This allows players to quickly gear up before rushing into a combat scenario. For this fight, the player selects an enchanted longsword.

Rushing toward the enemies, suddenly the action pauses and camera pulls away into an overhead view. Yes, the pause and play tactics are returning, and this time it's coming to all platforms. While in this view you can queue up commands for your party members, watch them play out, and re-pause the game at any time to alter your strategy. 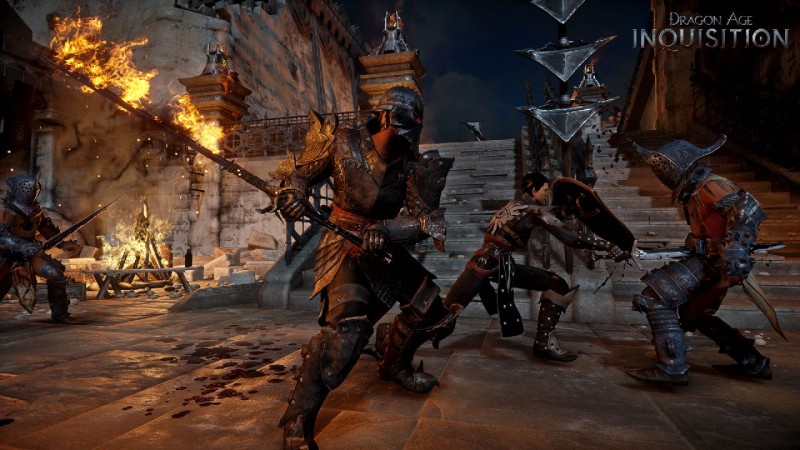 With the welcoming party taken care of, the group walks up to a hulking wrought iron gate. To infiltrate the keep, the party could circumvent its walls to find a vulnerable area to climb, discover a series of ancient tunnels that leads right to the keep, or, as in this case, use Cassandra's shatter armor ability to break down the door.

Inside the keep, a large number of cult members are waiting to repel the attack. Vivienne freezes the ground level enemies, which gives the Inquisitor a small window to run past them and strike the support beam holding up the bridge where the archers are positioned. With the beam severed, the archers are buried in a heap of rubble.

Not all these Venatori grunts are so weak. The next group of foes is led by a shielded enemy, who is invulnerable to spells, arrows, and head-on attacks. To take this guy down, Cassandra blows her war horn to keep his focus on her while the others flank his position to take him out.

The last group of enemies features a Venatori Conjuror, who immediately enchants the weapons of his legion. Vivienne creates a wall of ice to stymie their attacks, which buys them time to dispel the conjurer's spells. The player notices that most of the enemies are grouped closely together, so he uses the powerful Fire Storm spell to call down a strike from the heavens. This area attack makes short work of the Venatori. The Inquisitor walks over to raise his flag, and the keep is theirs.

Once you are in control of a keep, it unlocks several mission types. You could choose to concentrate the keep on espionage or commerce, or just redouble your military efforts. Each unlocks new opportunities to deploy your agents, which are your primary activists in the Inquisition. For this keep, some of the options BioWare mentions are rebuilding a nearby Steel Colossus, opening up the West Gate, or searching for alchemical artifacts. You have a limited number of agents, so you much choose carefully. 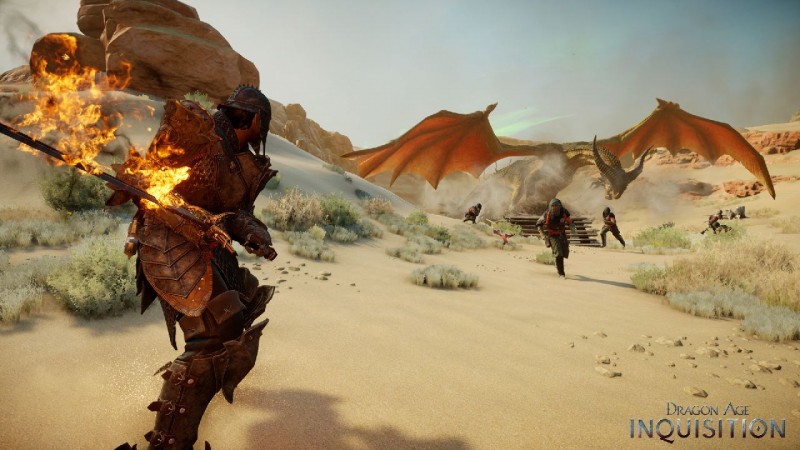 The demo concludes with the game's namesake. While the party is crossing the desert, a fearsome dragon circles overhead. After scorching the earth with a blaze of fire, it violently lands on the ground, turning a few pillars into rubble in the process. BioWare says each dragon is hand crafted to offer a unique challenge, and these battles should not be taken lightly.