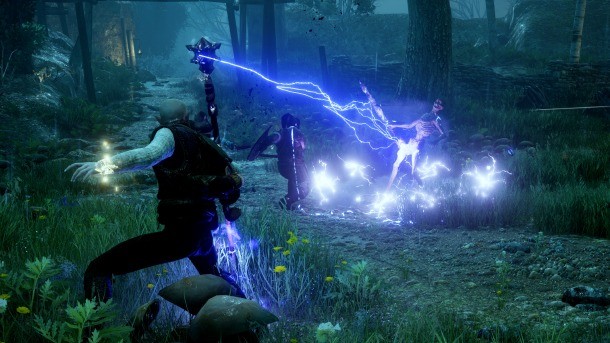 As the Inquisitor, players have the opportunity to visit grand castles and deal with some of the most powerful people in the world. However, not every step of the journey is glamorous. Sometimes the Inquisition needs to assert its strength in unsavory places – and that’s what eventually brings your hero to the Fallow Mire.

Given the common complaints about the limited environments in Dragon Age II, BioWare seems determined to make each area of Dragon Age: Inquisition worth investigating, and the Fallow Mire is a great illustration of that point. It is one of many optional areas you unlock by spending the Inquisition’s power as currency to establish a presence and explore. Even though it isn’t story-critical, the list of tasks to complete in this stinking, undead-plagued bog is surprisingly large.

In my time playing through the area, I made note of several ways to occupy my time. Of course, the game isn’t complete yet, so the exact activities (and numbers) can still change between now and release. But hopefully this list can help steer you toward something fun to do when your Inquisitor is knee-deep in the stagnant water.

This is the main quest in the area, received once the Inquisitor arrives. Scout Harding (a reliable Inquisition agent who gives you the lay of the land in new areas) explains that the leader of an Avvar tribe in the mire has abducted an Inquisition patrol in hopes of drawing the Inquisitor out. The ploy is successful, and players need to go rescue the captive soldiers and confront the Avvar chief. Your fight against him takes place in Hargrave Keep, a castle at the far end of the mire, so you will definitely encounter other activities in the area along the way.

On the path to Hargrave Keep are strange, monolithic structures. Each of these monuments has an unlit torch that can only be set ablaze by a mage in your party. Your job is to find and light all four of these beacons, but since they are giant stone pillars set atop hills, locating them is easy. Surviving the process isn’t, since waves of monsters crop up once the beacons are lit. This is the sidequest that you are most likely to finish, since it overlaps with the Fallow Mire’s main quest; you would have to actively ignore the beacons on your way to the castle to miss it. 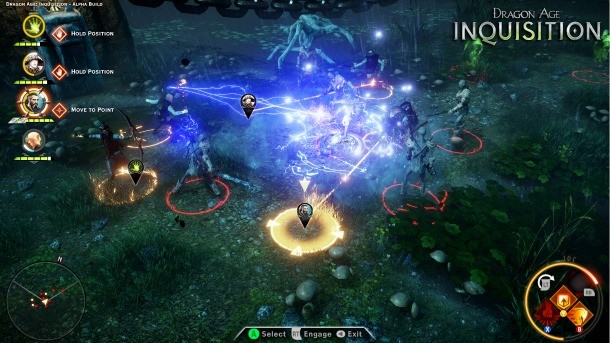 You may meet an Avvar warrior called Sky Watcher as you work your way through the bog. He doesn’t share the tribe leader’s desire to fight the Inquisitor, so you are able to talk with him and ask a few questions. He patrols near a rift in the Fade, which the Inquisitor also has the power to close. If you help him close the rift, and then defeat the Avvar chief, you have an opportunity to recruit Sky Watcher and make him an agent of the Inquisition once the scenario is over.

Assisting Sky Watcher has another perk; there are two rifts in the mire, so if you help him, you only have one more to hunt down and close. The process of closing these rifts is fairly straightforward: You see a green glimmer hovering in the air, and you press a button confirming that you want to attempt to close it. At that point, bolts shoot out from the rift and spawn demons, which you and your allies need to defeat. This weakens the rift, and after a few waves, you are able to permanently seal the tear in the Fade. The act also earns you power, which is what you spend in order to unlock more areas and operations.

A book that you find on the ground indicates that an apostate mage named Widris is hiding somewhere in the Fallow Mire. I didn’t have the opportunity to see this quest through to its conclusion, so you’ll just have to watch it unfold for yourself. 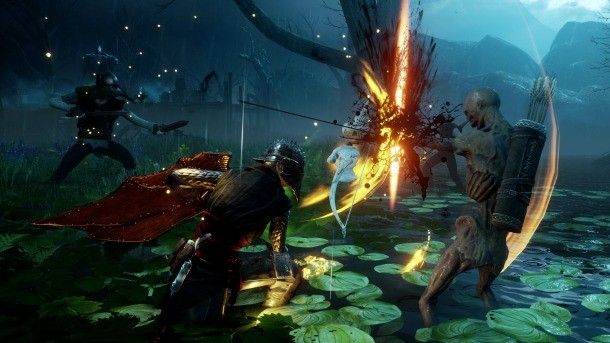 Landmarks are mainly just points of interest that unlock codex entries, but they are worth searching for if you are interested in getting a full picture of the world and its lore. Because the size and significance of the zones in Dragon Age: Inquisition can vary, the number of landmarks to claim in each one is different. You will definitely find more of them in larger areas like the Hinterlands than you will in more compact ones like the mire.

You can set up two Inquisition camps in the Fallow Mire. One is built already by the time the Inquisitor arrives, but you need to hunt down the other location yourself. These camps serve as bases where you can rest, but they also act as fast-travel points, making it easier to navigate an area. That may not be critical in smaller places like the mire, but you definitely want to establish camps in the larger zones.

At the initial camp at the starting area, you can get an assignment to collect samples for a geological survey. These rocks – like Blue Vitriol – are found throughout the bog, but they aren’t always in easy-to-spot places. Be thorough and keep your eyes open during your exploration.

It isn’t mandated by any specific quest, but you should constantly be aware of valuable materials surrounding you. Harvesting various minerals, plants, and other collectibles can only benefit you and your inquisition. Maybe the items are part of a crafting recipe. Maybe they will be useful for a quest later on. Maybe they can just be sold for money. Whatever the case, it pays to stop for a few extra seconds to harvest that seemingly worthless weed, because you never know when it might come in handy.

According to BioWare, the Fallow Mire is one of the smallest zones in the game. Even so, these tasks could easily take a couple hours to complete. Add that to the time you’ll spend doing quests and activities in other zones (big or small), and the scope of the game expands rapidly – especially for completionists. Dragon Age: Inquisition is shaping up to be a massive experience, with plenty of paths to power.