Developer id Software and publisher Bethesda are adding more than a new coat of paint to Doom 3 for the game's BFG Edition this fall.

The game comes out for the PC, Xbox 360, and PS3, and not only features enhanced graphics (and lighting), but it also includes the Resurrection of Evil expansion pack and seven new levels in what's being called "The Lost Mission." 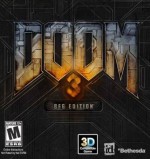