Disney Epic Mickey is only a few weeks away from release, and it's time to get equipped with the biggest features that shape the upcoming Wii-exclusive. We've gathered together ten central ideas that lie at the core of the game. Put on your mouse ears, and dive in.

Oswald
Did you know Walt Disney created another little animal hero long before he dreamed up Mickey Mouse? Oswald the Lucky Rabbit was Walt Disney's first cartoon superstar, but few remember the character in the wake of Mickey's great success. Epic Mickey is the first time these two characters are together in an adventure.

Side-Scrolling In Style
Many of Mickey's classic cartoons are incorporated into Epic Mickey as side-scrolling mini-levels that connect the game's larger 3D worlds. These stages almost come across as a love letter to Mickey Mouse and his creator Walt Disney. Of the cartoons featured, you'll run into stylish side-scrolling recreations of Steamboat Willie, The Mad Doctor, and many others. Along with E-Tickets, you'll find a cartoon reel hidden in each of these levels.

E-Tickets Can Buy You Goods
Anyone who went to Disneyland before 1982 will recall E-tickets. The coveted tickets offered access to the best attractions in the park. In the Wasteland world of Epic Mickey, E-tickets are a collectible resource that can be used to purchase any number of things around the world. There are shops in the main hub town of Mean Streets. There you'll be able to increase your maximum health or buy other collectibles that you missed along the way through the action levels. Alternately, E-tickets can buy your way through missions that are too time-consuming or challenging. Many missions offer a "buy-out" from an NPC in the world that lets you bypass the challenge and keep going with the game.

Are You Good Or Evil?
More than almost any character action/platform game that has come before it, Epic Mickey offers the ability to shape the experience to your style of play. Do you want to save those cute little gremlins? Or do you want to catapult them into the sky in exchange for some money? Paint in the world to fill it with color and life, or drain it with thinner? Missions offer definite good and bad paths. More than that, being a good guy is usually a lot harder than taking the easy way out. Want to play the game on "Hard" mode? Try being a nice guy the whole way through.

Know Your Enemy
Blotlings are made of paint and thinner and can be fought with those same liquids. If you pour excessive amounts of thinner on a blotling, it will melt and die. if you pour on the paint, the creature will become friendly, and will no longer engage you. Another enemy type called the beetleworx are animatronics, much like the robots found in many of Disneyland's rides. To defeat these foes, you'll need to use thinner to melt away their armor, then use a spin attack to damage them.

Unlockable Cartoons
One of the coolest extras we've seen in a long time is the ability to unlock classic, often rare, Disney cartoons to watch in their entirety. Lots of people have seen the Steamboat Willie cartoon that saw the premiere of Mickey Mouse. But have you seen any of Oswald the Lucky Rabbit's incredibly rare early films? They're here for you to check out, offering a glimpse of why Disney animation was the gold standard throughout the 20th century.

The Entire World is a Warped Version of Disneyland
Keen eyed observers will note that the Wasteland through which Mickey must travel is almost entirely a twisted recreation of Disneyland. From It's a Small World to Splash Mountain to Sleeping Beauty's Castle, the Wasteland is filled with homages to the original Disney theme park. Layered on top of the park environments is a constant flow of cartoon iconography and Disney memorabilia. Taken together, the game is a virtual smorgasbord for Disney fans hungry to see their favorite characters and places in a new light.

Paint & Thinner
If there's one thing that sets the gameplay of Epic Mickey apart from other games in the genre, it's the paint and thinner element of gameplay. The magic paint brush that Mickey wields lets him be good or bad, as we mentioned before. But it's also a fundamental tool for moving through the world and interacting with its characters. A bridge may cross to a far away platform, but you'll need to paint it in before you can progress. A gear may keep a platform spinning, but you can thin it out to make the platform a stable place onto which you may jump. By aiming the Wii remote at the screen, players are able to change entire elements of the game world, or attack enemies that stand in their way.

Reconstructing Mickey's Friends
As Mickey explores a twisted version of Disneyland, he'll run into dismantled animatronic versions of his friends, Donald, Goofy, and Daisy. When Mickey first runs into them, they are all just heads on pedestals. One of his quests is to find their body parts, which are hidden within the game's many worlds.

The World
Epic Mickey's world is divided into hub towns and theme-based environments consisting of multiple zones. In the towns, Mickey can enter shops, converse with village folk, and take on a number of optional side quests. The theme-based environments will be recognizable to Disney fans, and many of the sights and sounds on display are inspired by the parks rides and iconic characters. 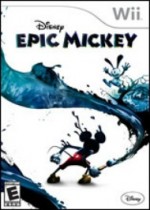