Rather than trickling out a series of smaller downloadable mission packs as it did with Dishonored, Arkane Studios is thinking bigger for expanded content for Dishonored 2. Death of the Outsider is a standalone adventure placing players in the shoes of Billie Lurk (a.k.a. Meagan Foster), the apprentice to Empress slayer Daud. The duo is attempting something many believe to be impossible – to assassinate the meddlesome deity who originally bestowed Daud, Corvo, Emily, and Delilah with supernatural powers. We spoke with Arkane co-founder Harvey Smith about how this expansion differentiates itself from its predecessors. Here are the biggest takeaways.

You Do Not Play As Daud
Given that the last game featured two playable protagonists, many speculated or assumed that Daud would join Billie as a playable character in Death of the Outsider. This is not the case – this is Billie's mission. Daud still plays a critical role in the tale, but he's more of a mission giver.

Billie Bears No Mark Of The Outsider
The three characters we have controlled in the Dishonored series so far – Corvo, Daud, and Emily – all bore the Mark of the Outsider, which bestowed unique supernatural powers to each. Already a formidable assassin without access to these otherworldly skills, Billie instead gains an edge on her opponents with an arsenal of powerful artifacts. The knife she wields is the same blade that originally sacrificed The Outsider. She gains the Foresight ability to scout the surrounding area with an artifact called the Sliver of the Eye. This is a fragment of the Eye of the Dead God, which Arkane implies is the divinity that came before The Outsider.

A talisman from her childhood sweetheart Deirdre gives Billie the ability to hear the whispers of rats. A powerful artifact gives Billie the Displace power. After placing this marker anywhere in the environment, she can snap back to the location instantly provided she is still in the marker's line of sight when she activates the power. She also has the Semblance skill, which lets Billie assume another person's identity, and a Void Strike charge attack that knocks enemies back.

Once you complete The Death of the Outsider, you unlock Original Game Plus, which grants you Blink and a couple other classic powers from the first two games for subsequent playthroughs. Contrary to some speculation, you do not get access to the full trees of Emily and Corvo; you get three to replace Billie's powers.

Visit New Areas Of Karnaca And Beyond
Taking place roughly six months after the events of Dishonored 2, Death of the Outsider returns to the southern island city. This time, however, you can look forward to seeing new parts of the city. In addition, you may return to some familiar parts of the city, but Arkane is changing the time of day and putting in new details that communicate the passage of time. Smith says players will journey to new locations outside of Karnaca as well that the studio isn't talking about just yet.

Don't Expect Corvo Or Emily Cameos
Having successfully reclaimed her throne, Emily Kaldwin has a lot of work to do to restore public confidence in her and wipe any last trace of Delilah's scourge from Dunwall. With so much on her plate, don't expect to see Corvo or Emily join the fray in Death of the Outsider. "From our perspective, they are off stage," Smith says. "They're dealing with the reconstruction of Dunwall." That said, the duo won't be unaffected by the outcome of the story. Should Billie vanquish The Outsider, anyone who bore the mark will lose their supernatural gift.

This Tale Wraps The Jessamine Kaldwin Story Arc
Killing off the deity who bestows the main characters with the supernatural powers that make Dishonored such a joy seems like a strange move if Arkane and Bethesda have future plans for the series. So I asked Smith if the Death of the Outsider is the final chapter of Dishonored. "Going all the way to the end with the Outsider, who's kind of a sad figure, and letting players deal with him one way or another way and resolve that whole arc, it does feel like the book is closing on at least this part of Dishonored," Smith says. "Now there may be another part, or not – I don't know. And I don't know whether I'll be involved with it."

Dishonored: Death of the Outsider is coming to PlayStation 4, Xbox One, and PC on September 15. 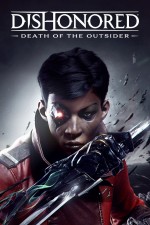