Bandai Namco released a new story trailer for Digimon World: Next Order ahead of the title's upcoming North American and European releases.

The trailer sets up the game's story, which begins seven years after players' last adventure in the Digital World. Since then, the powerful Machinedramon has wreaked havoc in the floating city, and players will be joined by a second Digimon partner to set things right. You can watch the full trailer below. 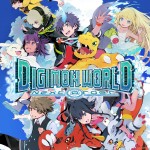