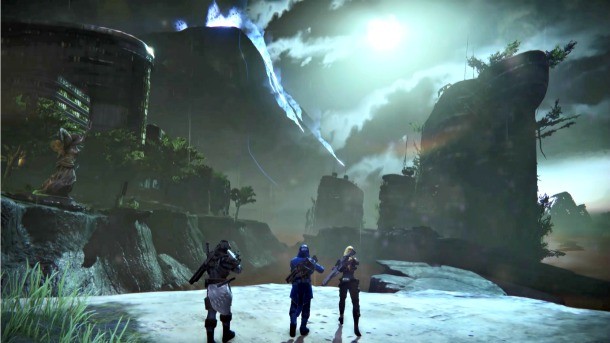 The new environment of Venus combines vast open stretches of forest and rock with ancient abandoned ruins. Players shouldn’t expect to have much time to admire the scenery of the garden world, however, as the video below also depicts battles against the Vex, robotic enemies occupying Venus.

In the world of Destiny, Venus was originally the site of an important discovery, and a paradise world for human colonizers. However, something went wrong, and the once- thriving research outpost was left to be swallowed by the jungle and the robotic Vex. The Vex have established a stronghold on Venus in the form of a giant tower that casts an ominous shadow on the planet below.

Destiny is releasing for PlayStation 4, Xbox One, PlayStation 3, and Xbox 360 on September 9. For more information on Bungie’s ambitious MMO-shooter hybrid, check out some of the other places you can go in-game, read our interview with Destiny’s production director and senior designer, or visit our cover story hub by clicking below for all kinds of exclusive content.