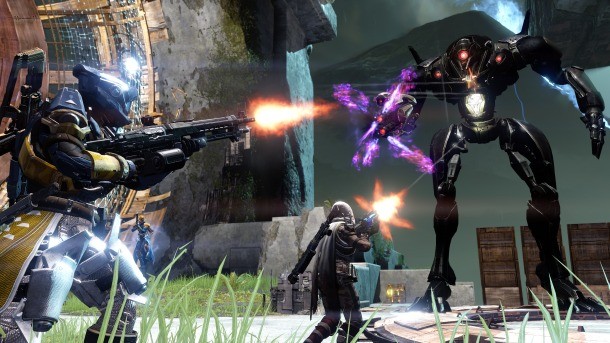 Destiny is a big game, and the servers only opened up yesterday morning. Much as I’d like to offer a final score and full evaluation, there’s no way to fully evaluate all the game zones, the competitive multiplayer, three distinct classes, and hours of solo and cooperative gameplay after a single day. I should know, as I played from early yesterday morning and on through late into the night, and I still have lots more to see. Nonetheless, that first day is enough to reveal some clear impressions.

The tight shooting and frantic battles that characterized both Destiny’s beta and its much earlier efforts in the Halo games remains in full effect in the final version of Destiny. That alone should be enough to gain many players’ approval, as the action is fun, the battles are well-balanced, and the guns feel varied and compelling to learn. What’s different now is the ability to fully explore the rich upgrade and leveling mechanics. I feel like I’ve only scratched the surface of its potential, but what I like so far is the way that you level both your subclass (for new powers) and your equipment. As the game opens up, there are more and more opportunities to customize your gameplay experience. Do I want to have a faster grenade cooldown, or more chances to use my powered-up melee attack? Should my gun have a laser sight, or less recoil? Early in the game, these systems are largely linear, but the options open up significantly several hours in.

The visuals are stunning, both from a technical and artistic perspective. The action remains smooth and seamless even at moments of extreme action, and the detail on environments and characters is remarkable. The game areas I’ve visited so far are filled with sights to see and vistas to overlook, which is good, because players end up returning to the same locales multiple times. In between moments of action, the screens in orbit offer a sense of continuity between places, but I’m disappointed that Bungie hasn’t managed to optimize the loading a little more. It feels odd to be waiting at a load screen for so long in a game released in 2014.

I’m a big fan of Bungie’s world crafting. Destiny is a beautifully imagined fiction, characterized by a humanistic and idealized vision of mankind’s heroism and potential. From the unique hierarchies of the different enemy alien species to the dynamics that govern the guardians’ interactions with the enigmatic Traveler, there are a lot of interesting elements to learn about. That’s why it’s unusual that Bungie has chosen to share so little about that world while you’re playing. The missions and progression do little to explain all the cool twists and turns of the universe, while an encyclopedic grimoire of lore unlocks over time, but only outside of the game on bungie.net. 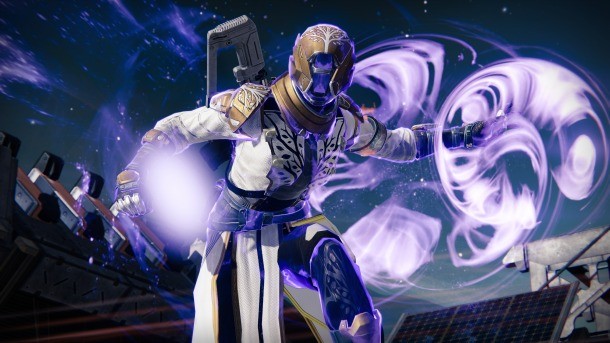 Beyond the science fiction setup, the storytelling in this thoughtfully built world is lackluster. After many hours in the game, there are few if any real characters to speak of. Instead, we’re meant to infer personalities from the characters we meet at the Tower, but it’s rare that we’re introduced to anyone in a meaningful way, or that we get any sense of true interaction between one person and another. After a day of playing, I’m just now starting to encounter some interesting twists in the plot, so I’m eager to see if things improve on the storytelling front.

Cooperative play is absolutely the way to go, if you can manage it. Playing with friends makes every mission more fun, and it’s noticeable how much more engaged with the content I feel when going into a challenging fight with a buddy at my side. Grouping up into two or three-person fireteams is easy and quick, and drop-in and drop-out options assure that players can come play for as little or as long as they like.

Competitive play in the Crucible has a number of new wrinkles to explore if you’re primarily used to Bungie’s Halo work. The presence of supers, all sorts of different weapons, and elevation-lifting movement powers really change up the formula. Stages are often highly vertical, so attacks can come from any direction. Multiplayer modes seem to unlock with play, and initially, your first few matches are in the Control game type. There aren’t any options to customize your competitive multiplayer experience, but the games I’ve played so far feel balanced, and the competition is already fierce.

It’s challenging while playing Destiny to step back from the different game modes, battles, and missions and really grasp the grand scope of the experiment. Touches of role-playing games, MMOs, shooters, lootfests, and open-world exploration are all mixed together here, and it’s great fun to take a single or multiple characters and shepherd them through the content. The way everything is tied together around your guardian offers a very real and engaging sense of investment and involvement, and it’s a sensation I expect to increase as I delve deeper into the game.

Looking for more launch coverage of Destiny? Check out our tips to get ready for Destiny, our Test Chambers on Destiny's  Earth and Moon, and join us as we live stream the game all day today.