Bungie gave us the opportunity to dig into the new public alpha of Destiny last week, in advance of E3. If you’re interested in reading some more about my day with the game, you can explore my hands-on impressions. However, that day also resulted in a couple hours of hands-on play with the new competitive side of Destiny – the Crucible.

Destiny’s competitive Crucible content is fully integrated with the rest of the gameplay experience. In between exploring story missions, cooperative play, or solo wandering, your guardian can travel to orbit and select the new Crucible location, and immediately head into competitive play. Storywise, the Crucible is described as an ongoing effort by one of the in-game organizations (called Dead Orbit) to expand into territory beyond the city.

The Control game mode was available for play in the alpha. The 6v6 mode should be familiar to most FPS players, as it challenges players to take control of three flags scattered around the map, and hold those zones against enemy attack. Each player is assigned onto either the alpha or bravo team before battle begins. Points are scored for holding a flag zone, and for taking out enemy players.

Two maps are available for play in the alpha. The first environment I play is an Earth-based map called Rusted Lands, which is described to be in an area called the Eastern Flood Zone. The relatively tight confines of the map are mostly populated with old ruined brick and mortar buildings. Flags are placed at two roughly opposite ends of the map, while a third hard-to-hold point is set in a roofless courtyard ruin near the middle of the stage. Deaths come quick as enemy players leap over the low walls or rush out of nearby tunnels.

A second map offered one of the rare glimpses we’ve had so far of off-Earth gameplay. First Light is a map set on the Mare Cognitum area of Earth’s moon. This very large map includes a central complex of several lunar buildings, and a surrounding area of more open areas that leave players vulnerable to attack. The glowing shape of Earth hovers in the sky as battles get underway. Playing on the First Light map is particularly significant because I got to see the first couple of weaponized vehicles that have been shown so far. The Pike looks like a floating motorcycle, but it controls nearly identically to the Ghost of the Halo games. I also saw a second larger vehicle that shoots heavy explosive ammo as it floats along the surface. No matter which map I played on, I got a good sense of how combat feels. In short, Halo players are likely to feel right at home. The speed of movement, shield/health recharge, and the number of shots needed to bring down an opposing player all feel comparable (though not identical) to Bungie’s previous work on Halo. However, Destiny competitive play has a number of new wrinkles that feel different from other competitive games. The use of super abilities changes the battlefield in a significant way, providing any given player a powerful tool to take out one or more opposing players. In addition, the variety of weapons that another player might be wielding makes it challenging to gauge exactly what you’re facing in any given one-on-one encounter. Perhaps the biggest feature that changes the feel of battle is the use of vertical movement abilities, turning any given conflict into a far more vertical affair. Depending on the movement mode that a combatant is using, it’s often easy for them to ascend from the ground to a second floor roof or raised doorway in a single move. During my time in matches, I found that my focus needed to shift to the vertical plane far more than I’m used to in previous Bungie multiplayer experiences.

Even as I played the Control mode on these two maps, the alpha teases with grayed out options for several other game modes. In addition, my half dozen matches only offer a taste of the rewards that players can access over a long period of play. Invest time in the Crucible, and you can gain crucible marks (a currency) and crucible reputation, which in turn can be used to get special weaponry at the tower. Players can also earn crucible gear directly through playing matches, but the specifics of what leads to these unlocks remains undetailed.

One of the coolest features of Destiny is the way it lets players engage with whatever aspect of the game they’re most excited about at any given time. I won’t be at all surprised upon launch to find players that only play Crucible multiplayer content, and others who never engage with competitive play at all. The game seems to support either direction, and everything in between. While the Bungie developers that were in-game the evening I played handed out some potent smackdowns during my session, I’m excited for some rematches when more elements of the Crucible come online. 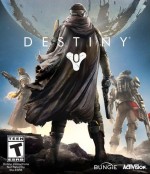