Defiance: An MMO Co-op Shooter With Perks And Flaws 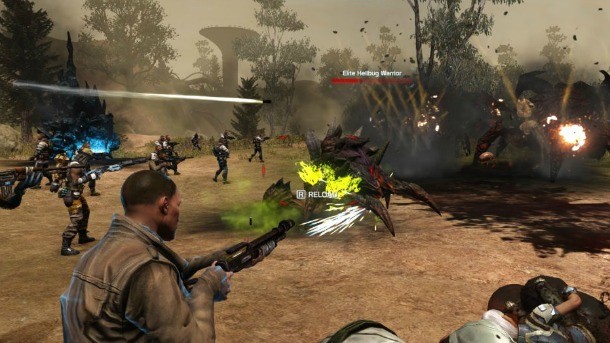 Trion has finally released its long-in-development MMO shooter, Defiance, which coexists alongside the SyFy cable series of the same name. Though it's not the first shooter we've seen with a massively multiplayer infrastructure, Defiance offers two things you can't find elsewhere: console versions and lots of cooperative content. Those are two mighty big features for a lot of players, and make up for a lot of Defiance's less thrilling features.

Dropped into a post-apocalyptic San Francisco and its environs, Defiance players are faced with a dizzying array of activities to lend context to the endless murder parade of an action-packed shooter. Main-line missions offer directed cutscenes with competently written and voiced dialogue, though the story starts out terrible and never rises above the level of average boilerplate adventure sci-fi. Minigames challenging the player to kill waves of enemies with a certain weapon or race their vehicle of choice through a series of checkpoints are fun diversions. The vast majority of the game, however, consists of thinly veiled minor variations on defending an NPC or attacking a group of entrenched enemies, sometimes with some clicking of objects sprinkled in. Whichever flavor the current mission is, it always boils down to killing a whole bunch of bad guys.

One of Defiance's biggest mistakes is in how long it takes to reveal the full brilliance of its tight gunplay and wonderful weaponry to new players. You can spend 15 hours shooting the same handful of mutant types with the same boring basic weapons if you try to clear out all the sidequests, and 14 hours of that is tediously boring. Do yourself a favor and power through the story missions exclusively, at least until you make it to the second area with its new enemies and better storylines. 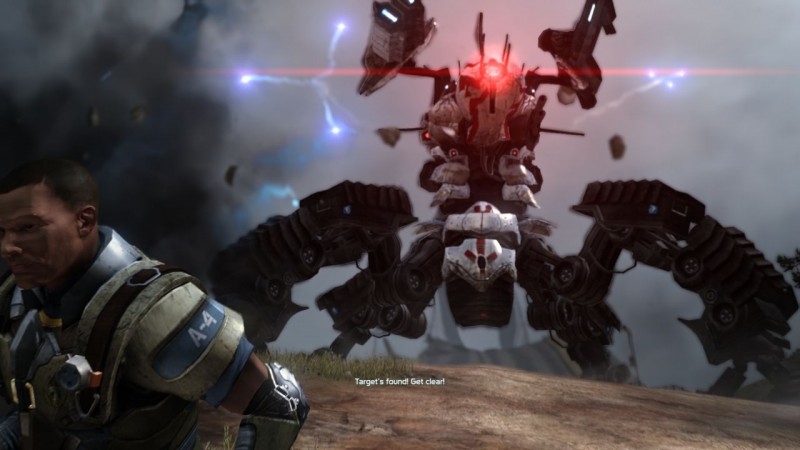 Once you make it there, Defiance's combat is beautiful. The world is conveniently laid out as a series of interconnected battlegrounds, each with its own opportunities for cover, high ground, killing fields, and hiding spots. Enemies are exceptionally aware of the environment, and do a good job of seeking cover from hostiles and flushing out or flanking enemies - especially since the AI can't "cheat" by knowing which direction players are going to come from, what weapons they have, or even how many of them there are like in a traditional linear shooter. Combat responsiveness is top-notch on PC; the Xbox 360 and to a lesser extent PlayStation 3 versions have had some growing pains that Trion has steadily improved upon since launch. Network lag artifacts like warping players or enemies, goofy hit detection, and jerky movement have been conspicuously absent from nearly my entire time with Defiance.

Defiance's best feature is its weapons. The variety within each of the usual shooter categories is incredible. Shotguns, for example, come in almost too many varieties: pump-action, semi-automatic combat, sawed-off, grenade-launching, single high-damage slug firing, extra-wide horizontal spread, and more. The same is true across pistols, SMGs, LMGs, rocket launchers, grenade launchers, assault rifles, and alien-tech beam guns. Combined with the various types and rarities of mods that you can fill the four modification slots with, an astounding spread of choices awaits every player. Randomly triggered effects like damage-over-time fires, slowing biological goo, and armor-reducing radiation add yet another layer. My high point of Defiance is the process of experimentation and tweaking that goes into creating a set of loadouts that fit the way I like to play.

My first 20 or so hours with the game had me exclusively using a bolt-action sniper rifle paired with a pump shotgun. The extreme lethality of sniper-rifle headshots is hilarious against distant targets, and the shotty's high burst damage demolished anything that dared approach. That slowly evolved into replacing the shotgun with an SMG that is terrible at hip-fire but exceptional when aimed, then using a scoped assault rifle instead of the sniper, and kept on changing. I went through dozens of configurations as I found new weapons, and I still change it up on a regular basis. Figuring out a way to make the exotic weapons work is pure joy; the grenade launcher that fires manually detonated sticky grenades that explode into more grenades repays the investment with absurd damage output. 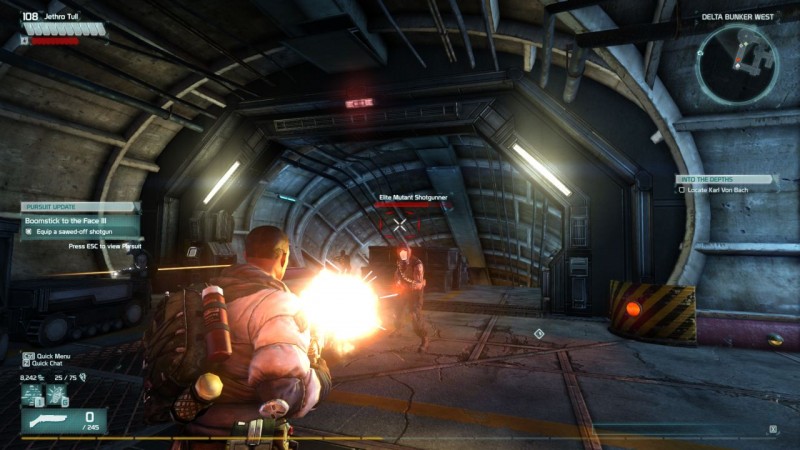 Players have access to one of four special powers as well: cloak, decoy, overcharge, or blur. Overcharge's damage boost and blur's movement/melee increases are of questionable utility compared to the absurdity of cloak and decoy's excellent instant panic button, but all serve their role in tight spots. I don't love their impact on PvP - more on that shortly - but they're fun in co-op, especially since the inconsistent mission design regularly throws absurd odds at you.

The mad variety of weapons is a wonderful thing for Defiance, because its other methods of persistent progression are lacking. Perks can be unlocked and customized as you level up, but they're all of the "you take five percent less damage when below an enemy" variety and are thus easily overlooked. I honestly couldn't tell you if any of my perks materially affected the outcome of a single fight I had in dozens of hours with the game.

Player-versus-player combat comes in two flavors, neither of which I find compelling. Regular matches are typical deathmatch-style affairs sadly dominated by cloaked players one-shotting whoever is waiting for their cloak cooldown to be up with shotguns. Shadow War rounds attempt to bring in some of the MMO flavor into balanced-team matches with elements like hostile NPCs and larger maps, but the general PvP imbalances between powers and weapons bring the experience down. PlanetSide 2 is a far superior PvP shooter MMO, and dozens of traditional shooters offer better match-based gameplay.

Cooperative play, however, is seamless whether you're on a story mission, sidequest, co-op instance, or engaging a massive dynamically generated arkfall event with dozens of other players. The number and toughness of enemies scale with local players, loot is distributed individually, and everyone gets credit for any action by a nearby player, so you're never upset to see a fellow human in the world. However, player concentrations are so low for anything but arkfalls that I found myself soloing more often than not. 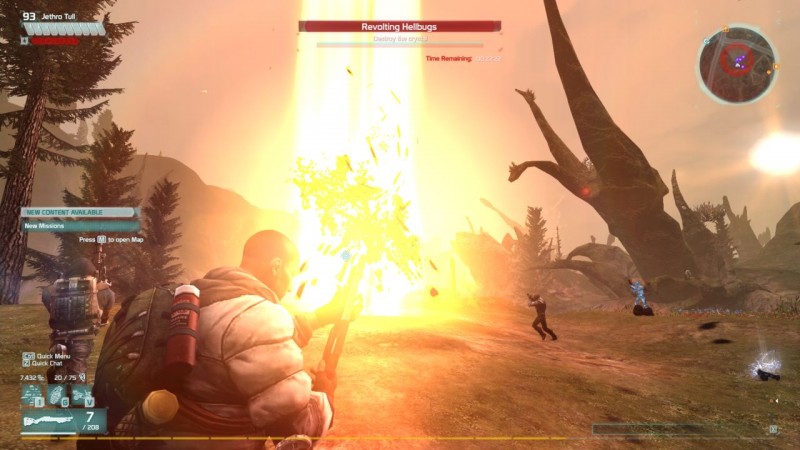 More concerning than low player concentrations - heck, sometimes I want to solo and there's always an arkfall or a co-op dungeon if I'm in the mood - are the frequent errors and bugs in mission scripting. I often had to log out and back in to access my next mission, and several times had to abandon and restart a quest or even wait for a server reboot to progress thanks to a malfunctioning script. I expected better out of Trion based on the company's excellent work on Rift and high level of MMO expertise.

I likewise expected better out of Defiance's interface. The HUD is clean, which I appreciate, but hiding vital information like remaining clip size and health/shield status in the corner of the screen is a mistake. Outside of combat, navigating the menus for character management, inventory, crafting, and social interactions is unforgivably terrible. The PC version feels like an up-rezzed console interface that requires three times as many clicks as it should, while the console versions have their own idiocies like having to scroll through text windows to access critical top-level information about weapons. It's all pretty with its artist-crafted sub-windows and slick sci-fi veneer, but the functionality is atrocious.

I don't care much about Defiance's cable-TV ties, though the additional (and temporary) questlines that roll out with episodes of the (so far mediocre) show are a fine way to do ongoing content. Neither do I care for its PvP, or many of the ways it integrates MMO elements like social, inventory, and crafting systems. I find myself forgetting and forgiving all of that when I'm blasting away at evil robots with a radioactive shotgun, recharging a buddy's shield with an alien beam weapon that shoots chain lightning, or setting entire groups on fire with an extended-mag flare pistol. As a co-op game with an effectively infinite gear grind, occasionally amusing storylines, and a sweet hot pink Mad Max dune buggy to tool around in, Defiance works perfectly well.

Looking for more on Defiance? The episode of our MMO podcast that dives deep into the game is a great place to start. 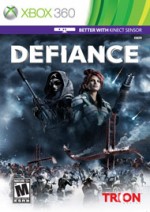