Your party consists of four gun-totting dwarves. After a successful mission, you can buy them new beards. If this doesn’t pique your interest, perhaps the excellent exploration and gunplay will.

Deep Rock Galactic isn’t officially out yet, but is available to play now through Steam Early Access or Xbox One’s Game Preview program. After vesting a few hours into this unique experience – which plays out like a mix of Red Faction, No Man’s Sky, and any game featuring a horde mode, I can say it’s well worth your time – just know it’s a work in progress, and crashes, and server issues abound.

Your dwarf is employed by a mining company that is stripping an alien world of its riches. When you descend beneath the planet’s surface into its serpentine caverns, you’re tasked to mine whatever you can, although the mining company designates which mineral you should focus on to complete the mission. The caves are sometimes lit by lava-spewing geysers or glowing fauna, but most of the light either comes from your headlamp or flares that you toss into the darkness. A suffocating and ominous vibe hangs over these sprawling areas, and wandering too far from your party can lead to disaster, as you are not alone. From what I can tell, the primary foes in the game are crab-like creatures that are sometimes made out of rock. For these tougher, armored foes, you'll need to circle around them to find a weak spot (which glows). You'll periodically run across these aggressive beasts, but are mostly bracing for your commander to yell that a swarm is on the way. This is where the game shifts to a horde-like mode, where every shot matters and teamwork in a tight circle is the best way to eliminate the threat. Ammo is limited and can only be regained by calling in a drop, which costs resources that are shared by the team. All resources are found within the mine itself. You'll find deposits of gold, and other rare minerals which can be used to purchase weapon and gear upgrades. While you'll want to work on leveling up and enhancing your starting character, you'll also want to play as other characters, as the game is class-based. You can play as a Driller, a heavily armored drilling machine that wields a flamethrower and satchel charges, a Scout, that carries a machine gun and "boomstick," a engineer, that can deploy a turret gun, and my guy, the gunner, who carries a powerful minigun and grenades. All four classes feel quite different in the field of play, and complement each other nicely.

While the combat is where the game really gets your blood pumping and demands the team work together, the basic, slower mining moments are also fun. Much like the old Red Faction games (or Minecraft), the player can use a pickaxe to dig through everything. Specific wall colors tell you that an area exists beyond them, but you can tunnel almost anywhere, and will sometimes need to to get to higher areas. You can also deploy a zipline that can be ascended or descended to stretch over caverns or access higher platforms.

The reward look doesn't offer much at the moment outside of meaningful weapon and armor upgrades, but is something I'm sure developer Ghost Ship Games is looking to increase. The core gameplay loop is quite engaging, and shows a high level of polish for a game that just hit Early Access. The occasionally "server connection lost" moments are annoying, but I was able to rejoin a couple of games I was kicked from. Ghost Ship warns players from the outset of play that this area of the game is receiving the most work right now.

If you're in the market for a new cooperative experience, where everyone is truly working together, I can't recommend Deep Rock Galactic enough at this point. I can't wait to see what the tougher missions bring. 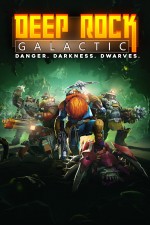