Canadian developer Hothead games is best known for its previous episodic series Penny Arcade Adventures: On the Rain-Slick Precipice of Darkness. With a team composed of ex-Radical Entertainment developers (The Incredible Hulk: Ultimate Destruction), we expect more great things from this studio. The next downloadable game Hothead is working on is an action/RPG named DeathSpank. Start getting excited now.

During our first half-hour with the game, we collected chicken lips for a witch’s stew, bought supplies from a lemonade stand run by a snooty pre-teen, and retrieved a fishing tackle box belonging to a yellow-bellied fisherman. We enjoyed our experience so much we decided to try and get some extra details about the game from one of Hothead’s designers. Watch us try to get a straight answer out of designer Chris Mitchell below.

We know that the story involves a hero searching for a lost artifact. Is there anything more you can tell us about the narrative?

For as long as he can remember, DeathSpank has searched for the The Artifact. It is a mysterious object built by mysterious forces for a mysterious purpose from very well known materials, carbon mostly. In his travels he has brought justice to the downtrodden, faced the riddle of bacon, and defeated evils so great naming them would hurt your recording device a little bit. Now at last he will learn of his true purpose…

Injecting humor into a game is never easy. How do you write a game that people expect to be funny?

This question of how do you make games funny comes up a lot, and we’re never sure how to answer it. The essence of comedy is timing, and video game actors have no timing beyond that which you manufacture into them. So I suppose the answer is, “watch lots of Three's Company while growing up.” It worked for us.

How big is the world of DeathSpank?

Big enough that focus testers kept getting lost until we added arcane navigation technologies called ‘maps.’ Big enough that our mighty computers would crash when we tried to edit those maps. Big enough to drive developers mad when trying to remember where everything is! Pretty big.

Where did the name DeathSpank come from?

The title came about when some of the guys on the team were literally trying to think of the most far out name for a hero they could come up with. Something that made fun of the sort of game the game industry wants. The name and concept for DeathSpank stuck into [creative director Ron Gilbert’s] head until he reached the point that it had to get made. It was a name and concept so good that every major publisher turned it down. Only the truly great get universally rejected at first.

What kind of quests can players expect to find in the game? You get cards as you level up. Can you explain this system a little more – is there a limit to the number of cards you can use at a given time, and are there special cards that perform unique tasks?

Each time DeathSpank levels up he gets a choice of one of three Hero Cards. Each card gives different bonuses to DeathSpank, changing the way the game plays from player to player. Choose carefully! The only way to change your choices is to buy the game again! Alternatively you could start a new game, which works too.

We played around with the weapons and noticed “Justice Ready” flash on screen a few times. What does this mean, and how does the weapons system work?

Certain weapons are ‘Weapons of Justice’ (WOJ). Justice is built up when DeathSpank hits enemies. Build up enough justice and you can unleash it with vicious WOJ attacks. These can shatter the ground, freeze enemies, or cause them to spontaneously combust. WOJ are the secret sauce in our DeathSpank deluxe.

The main character sounds a lot like Captain Quark from the Ratchet and Clank series, but he’s not the one listed on IMDB. Who’s voicing DeathSpank?

DeathSpank is voiced by Michael Richard Dobson, a man with a simply ridiculous number of voice acting credits. He threw himself into the role. Over time you could see the distance between Michael and DeathSpank shrink. Now Michael insists on being called “FleshSpank.” Kind of sad, really.

A lot of the action seems weapon-based, but will DeathSpank have access to magic attacks at any point in the game?

DeathSpank’s physical attacks are further empowered by a wide variety of mystical energies, but that’s only just the tip of a delicious iceberg. DeathSpank can call hell from heaven, unleash clouds of arrows, blast people with lightning, make the dead walk and open small portable black holes.

Any plans to include some kind of multiplayer component?

I…er…uh… look over there! It’s bigfoot!

Do you have a projected release date?

Soon enough for us to be starting our PR and marketing push. Hint hint. You probably can’t tell from reading this, but I’m winking right now. 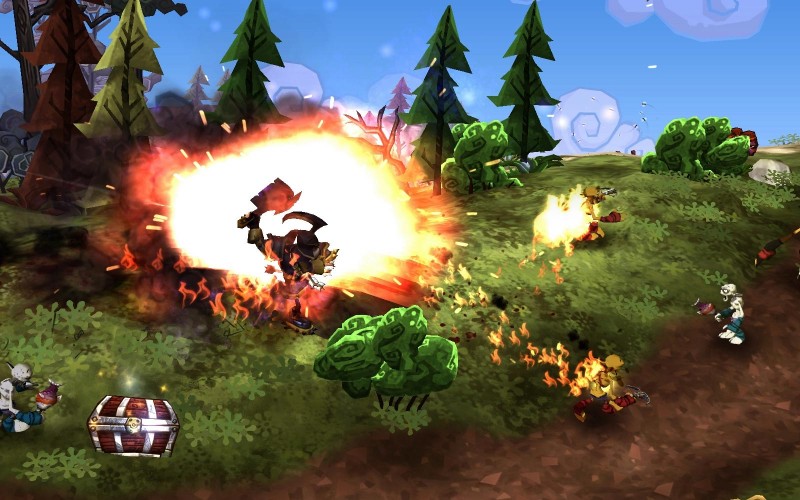 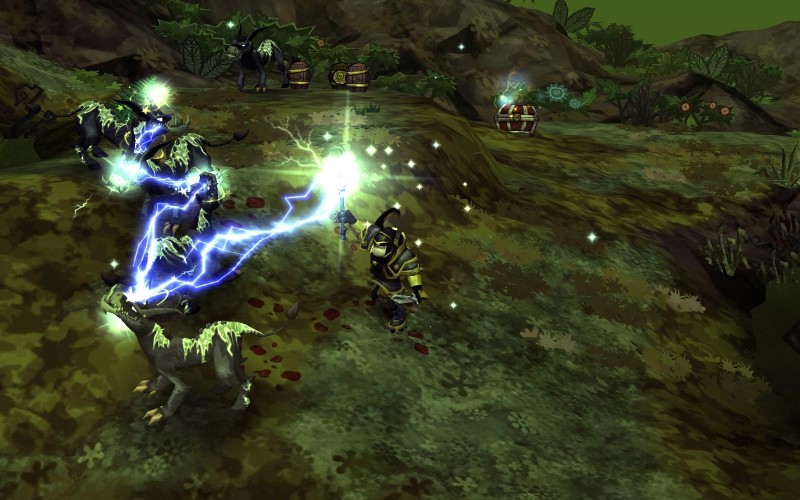 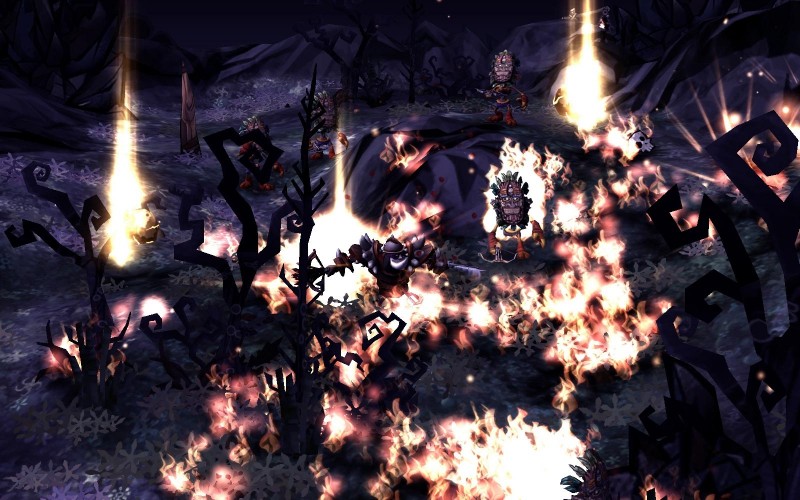