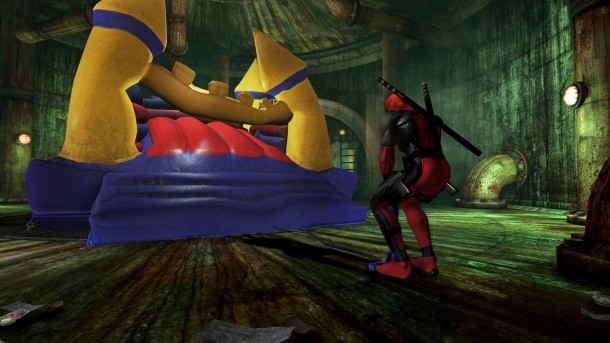 Marvel’s Deadpool is one of the most eccentric characters in comics. He is a mercenary who is friends with both heroes and super villains. He has a mile-a-minute mouth and a grating personality, yet his fans find him charming. He’s a hand-to-hand combat specialist with a penchant for big guns and explosives. And he’s completely bonkers. After earning his own monthly comic series and appearing in titles like Marvel vs. Capcom 3 and Marvel Ultimate Alliance, Deadpool has finally earned the right to star in his own game.

In the comics, Deadpool regularly references his comic creators and talks to his readers. Developer High Moon is incorporating this concept into the game itself. Deadpool not only comments on how well players perform during combat, but the game’s narrative centers on the idea that Deadpool has taken over a video game studio and is working to design the “most kickass” Deadpool game possible.

“During the game, he might turn to you and make a wise-crack about how well you are doing playing him, or make fun of you for how badly,” says Sean Miller, game director at High Moon Studios. “It’s been a long time since I’ve laughed this much while making or playing a video game.”

The game’s most recent demo starts with Deadpool accepting a contract to assassinate a media mogul. As Deadpool works his way through the billionaire’s high-rise, he shreds through several security guards. Deadpool’s ADD-riddled personality comes through in his combat style, which is erratic and fast-paced. After running down a hall firing two pistols at a group of guards, he might perform a spin attack with dual katanas or grab a sledgehammer and knock together a few heads. As Deadpool dances through combat, he builds up a series of combo bars that unleash room-clearing special moves such as a spinning sword attack.

One of Deadpool’s powers is a healing factor similar to Wolverine’s. This makes Deadpool nearly invulnerable, but he isn’t indestructible; he slowly falls apart as he suffers damage during combat. Players can either wait for the missing limbs to regrow or pick up his missing chunks and reattach them. When we asked Miller if Deadpool’s healing factor makes the game more difficult to balance, he shared an interesting opinion about the state of modern gaming.

“Really, how is this different from any other video game out there? We’ve become used to the idea that ‘my character’ can soak up damage and miraculously recover from multiple gunshots, or if I actually die, I just respawn at my last checkpoint. Just because I can take a lot of damage doesn’t mean I can’t lose – and Deadpool hates losing.”

Deadpool breaks the fourth wall as often as he break noses, but that could be one of his game’s most distinguishing characteristics. Given High Moon’s pedigree working on licensed titles like Transformers: Fall of Cybertron, we expect this game to be a polished experience full of comedic action and dazzling explosions.

Humor isn’t an easy thing to inject into a game. Deadpool is known for talking a lot, and players will be able to hear the voices inside his head, which creates the possibility of Deadpool overload. We asked game director Sean Miller what the studio is doing to make sure the humor stays fresh.

“The key is that Deadpool wants to be a likable guy. He’s been through a hellish life, and like many of us, the jokes he cracks help lighten up some pretty serious business. The game won’t be an endless stream of repetitive one-liners – he’s playing the game with you, so his thoughts and jokes are in the context of what you are both experiencing. He just lets out who he is, unfiltered – something none of us get to do in our day-to-day lives.” 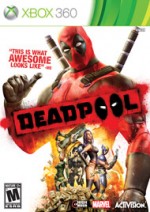