It’s been a few months since news of Dead Rising 2 came shambling out of Capcom’s offices, and we’ve finally gotten the chance to play it. At an event in Tokyo, gamers from around the world got to test the game’s single-player mode out for a while before squaring off in the competitive multiplayer mode, Terror is Reality. Rather than simply plop a few more players alongside new protagonist Chuck Greene and call it good, Capcom and Blue Castle Games have devised a separate experience that’s completely bizarre, gratuitously violent and an absolutely welcome addition to Dead Rising.

In the single-player demo, players got to explore one of Fortune City’s casino environments. The place was filled with American themes, from a BBQ restaurant to a Hard Rock Café knockoff. It was also completely overrun with zombies. Fortunately, there were plenty of weapons on hand to help clear them out. Some were already known, having been revealed alongside the game. The paddlesaw, a canoe paddle with chainsaws attached at each end, was a satisfying and gruesome way to wade through teeming crowds of undead. Weapons like chainsaws and pipes felt downright vanilla in comparison. Machine guns showed off the new run and gun mechanic, which allowed players to walk around while firing weapons. It’s a pretty obvious addition for western audiences, but we’re glad to have it late than never.

Of course, it’s still Dead Rising. That means access to a plethora of wacky new weaponry, too. Some of the new additions included a wheelchair that could be pushed through mobs (like the parasol in the first game), and it even attracted a few accidental passengers along the way. Paintings can be slammed over the heads of the undead, leaving their arms pinned helplessly at their sides. A hobby horse looks harmless until you see it impaling a ghoul. Weapons can be used by pressing the X button for regular attacks or by holding the button down longer to use stronger attacks. A chef knife might produce a flurry of slashes, or a psychotic chest-stabbing, depending on player preference.

In the demo, we had 10 minutes to kill 300 zombies. Once we did that, we unlocked a special prize—a fully weaponized wheelchair. With that, Greene was able to scoot along, firing three machine guns simultaneously. The unlimited ammo helped carve a path through the masses, too. We easily racked up 150 more kills in two minutes.

One of the mysteries around the announcement of the sequel was how the introduction of in-game currency would affect gameplay. The scope of Dead Rising 2’s economy still isn’t completely known, but we did see a little bit of it in effect. A mechanical bull sat prominently in the middle of one area, and after paying $1,000, Greene could ride on it. At that point, a little button-pressing minigame popped up as he did his best to stay atop the device. If Greene finds himself lacking money, he can pick up cash from the ground, by breaking cash registers or other methods. One that we saw in action was a cash-grab booth. After entering the glass enclosure, money started blowing around the phone-booth sized box. Pressing the A button rapidly allowed Greene to snag more loot.

Once we had our bearings, it was time to check out the new multiplayer. Terror is Reality, the multiplayer mode, is also the name of an in-game reality show. In a world overrun by zombies, what else is there to do but kill them for the entertainment of mass audiences? In a cross between the Running Man and American Gladiators, four helmeted players compete in four rounds to kill as many of the undead as possible. There’s more to each minigame than just wanton destruction, though. Well, sort of. Here are four that we saw. Capcom says more are in the works, so consider this a sneak preview of sorts. In Ramsterball, players roll around in spherical cages, trying to smash into as many zombies and bumpers as possible. The stage is a glitzy arena with banked edges and a crowd that’s (presumably) safe behind walls of plexiglass. At the start of the match, a player is picked randomly to be it. That player can earn points by smacking into the bumpers that are scattered around. Other players give chase, trying to smack their ball into the chosen player, which allows them to become it. Once time runs out, the player with the highest score wins.

In Headache, players try to put blender helmet things on zombies and try to get as many possible points before time runs out. A dispenser in the middle of the ring doles out three of the things at a time, though players can go back for more if they plant them all on zombies’ heads. Players earn points by pressing a button that activates the blenders, scrambling the contents inside in a gruesomely bloody display. To make things a little more strategic, points are awarded exponentially for having more helmets in play before the button is pressed. Having a crowd of zombies with your colors makes them targets for other players, who are trying to do the same thing. In addition to the helmets, players also have sticks of dynamite, which can be used to blast zombies from the other teams. It’s a risk/reward situation that adds more strategy into a game that’s based on turning (formerly) human skulls into soup.

Pounds of Flesh starts with each player sporting metal moose antlers, attached to helmets. Zombies drop into the ring, and players have to charge into them with the horns and knock them over a railing and onto a scale. The player with the biggest net weight at the end wins. There’s not much else to it, but don’t let the simplicity fool you. It was one of the most fun games in the multiplayer.

Finally, players are ranked according to their scores in the preceding three games. Players who don’t finish first get a time penalty for the final match, a la American Gladiators. In Slicecycles, players ride chainsaw-enhanced motorcycles through shuffling mobs of zombies. Points are awarded for kills, with specially marked zombies netting bonus points. After a minute, a bonus mode starts, which adds even more zombies. The spawns get to be insane, with hundreds of the things littering the screen (and bleeding on the ground). Once the timer runs down, points are awarded and a winner is named.

It’s a hectic experience, and it’s a surprising departure from Dead Rising. We know that Chuck Greene is a participant in the show, though his exact reasons are a mystery. Knowing what we know about zombie movies, the arrogance of all involved in this show will surely come to haunt them. If that’s the case though, it’s a disaster that’s been a long time coming; the fake trailers for the show say that the event is up to its 17th event.

The game’s looking good, and the weapons are satisfyingly chaotic. The freeform combat, where players scan environments for the nearest weapon (no matter how odd) is here in a big way. The new weapons are a lot of fun, and they have a lot of variety to them—it’s not just more of the same. There was some slowdown during multiplayer—particularly during the Slicecyles event—but it definitely wasn’t a dealbreaker.

Ultimately, we liked what we saw, and we can’t wait for our next chance to enter the ring. 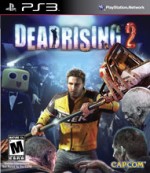