Dead or Alive 5 always played well on previous consoles, and during my hands-on time with Last Round on PlayStation 4, the gameplay feels as strong as ever. The character models still look fantastic, and the fighting mechanics continue to feel great.

Over the course of several hours playing a near-final build of DOA5 Last Round, I had a chance to spend time with every mode – from story to survival – with the exception of the online suite.

While most fans of the series have already experienced the smooth combat, busy stages, and pretty graphics of Dead or Alive 5, Last Round brings all of the content from the previous iterations of DOA5 to the new generation, becoming the first 3D fighting game on PlayStation 4 and Xbox One. But that’s not all, as Team Ninja added more reasons to check out Dead or Alive 5 Last Round. The big selling point for many remastered games from last-gen is that they run at 60 frames per second and feature 1080p resolution. For the new-gen versions of Dead or Alive 5 Last Round, that jump makes a big difference in how it looks, particularly with the stages changing over the course of a match.

The smoother nature of these transitions makes the fights feel even more like they’re ripped right out of an action film. In addition, the fighters themselves move in a smooth fashion as they battle back and forth. Even though I can only speak for my time with the PlayStation 4 version, the development team tells me the plan for the Xbox 360 and PlayStation 3 versions of Last Round is to run at 60fps as well, while only outputting 720p. Last Round brings all the characters and stages from the previous versions of Dead or Alive 5, providing players with a substantial fighter roster and a large library of stages to battle on. To add to that, Last Round offers two more characters and two additional levels, bringing the tally to 34 characters and 31 stages – both high marks for the series.

Raidou, the boss character in the first Dead or Alive game, makes his reappearance in the form of a powerful cyborg, while Honoka, a character who draws inspiration from other fighters’ moves, makes her series debut. Raidou controls like the hulking tank that he is, throwing slow, yet powerful moves at opponents, and Honoka uses similar attacks to other fighters throughout the roster. Thanks to Honoka’s smaller size, she is able to get these attacks off quicker than some of the larger fighters who inspired her use of the moves, but her versions won’t pack the same punches. Longtime fans of Dead or Alive will recognize The Crimson and The Danger Zone as two returning classic stages, which both look great with the updated graphics. A large part of the Dead or Alive trademark is in how the character models look. From the bulky male characters to the unrealistically-proportioned female fighters, fans of the series have come to experience a certain style from the cast of fighters.

With Last Round, characters have received facelifts through Koei Tecmo’s Soft Engine, which was designed with the intention of adding a new layer of realism to character appearances. The Soft Engine is designed with the notion of adding warmth and softness to a character’s body. This is most noticeable during the up-close sequences before and after fights, where the skin of the onscreen character is at the forefront. Given the series’ pedigree, it makes sense that Team Ninja wanted to showcase this new engine in the Dead or Alive series. For Last Round, Team Ninja rebalanced the A.I. to react to the player in more realistic ways. This also allows for new players to have an easier time as they get their bearings, while more experienced players can expect more of a challenge coming from the A.I. fighters.

The A.I. now reacts to players more like an human opponent would – acting more adaptive to player behavior in a fight and giving new life to the single-player modes. It remains to be seen just how deep this re-balancing goes, but from my time with Last Round, the A.I. was reactive and smart.

Dead or Alive 5 Last Round launches on PlayStation 4, Xbox One, PlayStation 3, Xbox 360, and PC on February 17. 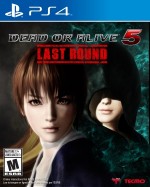