A  single Horseman of the Apocalypse fights against angels and demons as he amasses enough power to take on the Destroyer, a beast who left the world in ruin. With a storyline rooted in a conflict of biblical proportions, it is no wonder that most talk about Darksiders has been centered on battle; the stylish combat system is easy to pick up and understand. This tends to overshadow the game’s other major element, exploration, which takes shape more slowly over an extended time -- something we had a chance to experience firsthand as we spent a few hours playing the latest version of this post-apocalyptic adventure.

As the game begins, the horseman War is cast down to Earth, stripped of his powers as punishment for prematurely instigating the end of the world. Much of the overworld is closed off to him in this weakened state, but we saw hints of the potential paths scattered across the hub area. After obtaining the right gear, War can use blue circles on the ground for a jump boost, glide over gaps too wide to jump, and break through crystals obstructing a door. Encountering these obstacles for the first time gives a similar sensation to seeing a red door in Metroid or a cracked wall in Zelda; you know that getting somewhere new is just a matter of finding the right tool.

Once you reach these areas, you can also access new “dungeons,” self-contained areas branching out from the main overworld. They may not be dungeons in the classic underground temple sense, but they are similar in concept; they present War with a series of trials and combat encounters before pitting him against a boss. We played through a series of submerged subway tunnels, turning cranks and pushing train cars to progress. We had to fight back plenty of bloodthirsty monsters along the way, but the ratio of combat to exploration felt well balanced.

Even the boss fights integrate a degree of puzzle solving. For instance, we fought a huge dragon-like aberration called Tiamat at the end of the first dungeon. War battles the she-beast from the roof of a cathedral, where the creature circles above and shoots gouts of flame. To bring her down into melee range, we grabbed a dormant sticky bomb off the ground and whipped it at her, then used our boomerang blade’s chain-targeting to hit a burning torch before arcing toward the bomb and igniting it. The resulting explosion took Tiamat out of the sky, leaving her open to War’s sword combos. The process may not sound too complex, but Tiamat is the first major fight; developer Vigil Games promises subsequent boss battles ratchet up the scale and complexity.

Darksiders was first announced over two years ago, but it seems like the increased development time has been well spent. Vigil has created an impressively large world, a dynamic combat system, and imbued each character and creature with a distinct comic book vibe. If all of these elements continue to come together during the next few months, living through the apocalypse could be an excellent way to ring in the new year. 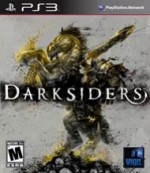