The debut gameplay trailer shows off how this hack and slash action/RPG will look on your screen later this summer.

Fans of Gauntlet and Diablo have a new game to follow. Crimson Alliance is an upcoming 4-player cooperative (online or offline) game being developed by Certain Affinity for release on XBLA this summer.

The game lets players choose between three classes -- the assassin, mercenary, and wizard -- and then sets you forth into a bright, magical, and dangerous world of monsters.

Crimson Alliance is being designed as a "living game", so the team plans to release new episodes and challenges over time.

Check out the gameplay trailer for this exciting project below. 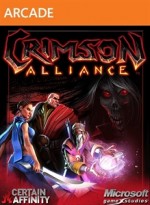