Contrast is a puzzle/platformer with a twist. You can run around the world in 3D and then jump into the shadows and walk along any lit surface. The game’s puzzles involve manipulating lights in order to change the shadow landscape. To get a better idea of how the game works we chatted with Compulsion Games creative director and founder Guillaume Provost.

To start can you give us a brief history of Compulsion Games?
I started Compulsion Games after moving back from Europe, during the height of the economic recession in 2009. I’d been freelancing for a while after working at Arkane Studios, and moved back to Canada to create a structure around the project. The team gradually grew with industry veterans who fell in love with the project, but it took us some time to get a solid enough financial footing to start actual development. Contrast is the studio’s first game, but our team members have worked on larger projects, such as Far Cry 3, the Full Auto franchise, Darksiders II, and Too Human.

Contrast looks like a vaudeville-inspired dreamscape. Where exactly does the game take place?
We wanted to create a unique setting and time frame in Contrast that gave it some character, so we blended influences from the 1920s Burlesque and Vaudeville era with some more classic film-noir elements from the 1940s. The architecture is largely inspired by Lyon, France; which is where I lived when I originally penned the concept for the game.

The idea was there from the beginning, and was originally inspired by Portal when we brainstormed different ways of traversing through space. However, tying both worlds together took a much more significant role when other shadow-based games (such as Shadow Physics, Lost in Shadows, and Echochrome) started emerging in the market. We felt that we needed to adapt the design of the mechanic to create a more unique experience, and those projects forced me to make our own concept better.

Who are the main characters and what are they trying to accomplish?
Dawn is the imaginary friend of a young girl named Didi, and she helps her discover, resolve, and cope with issues surrounding her family throughout the game. Although Contrast is not quite as dark as Pan’s Labyrinth, we were very inspired by it when establishing the story arc, and liked the idea of impersonating a character out of a child’s mind.

Dawn develops additional powers throughout the game that deepen the ways in which she traverses through the environment. You get the ability to dash between spaces, for example, which is a simple mechanism that pulls you out of shadow space for a short time, gives you a boost, and brings you back into shadows. This allows players to “skip” between the worlds when they are platforming.

However, a lot of the game has to do with expanding and slowly increasing the interactive nature of the shadow mechanic, and as such we’ve stayed true to the formula of Portal and Braid.

How has this unique shadow gameplay challenged you guys design wise?
I could write an entire article about the challenges we faced design wise. You can’t really design or visualize most of the puzzles on paper or in your head, because all of the shadows in the game come from real objects in the scene, and we realized early on that our project was really ambitious. We also hit a lot of skepticism with publishers at first on whether we would really be able to pull it off. The mechanic is a lot harder than it looks, but then so was Portal, and yet Portal didn’t invent portals.

When discussing artistic direction, for example, we wanted to create a film-noir atmosphere; but then the way the world is lit directly impacts where players can traverse in shadows, so we had to think about how to visually communicate that interaction without compromising the mood. Players also walk and follow along wall surfaces in a free-form way when they are in shadow, so we had to curate the surfaces of buildings, to ensure wall details such as awnings and windowpanes were details the players could ignore or were actual geometry they could stand on. Making all of this natural and intuitive, while retaining a rich visual atmosphere was a big challenge at the beginning of the project, and we had to find creative solutions to make the visual and gameplay elements of Contrast work together in a cohesive experience.

Can you give an example of some of the puzzles that people will have to deal with in the game?
We try to pace the player’s experience in a way that gradually increases the ways in which you can interact with the world. In some areas, we might allow you to move a light around, dynamically changing the shadow landscape in a way that leaves you in control of how you might want to navigate the environment in that space. In others, we’re teaching you to platform in multiple dimensions, by making you jump off a ledge in 3D and then land on a shadow because there’s nothing else to physically hold you.

Contrast is currently slated for a May release on PC through Steam for $14.99, but the Compulsion Games is also in talks to bring the game to other platforms as well. Check out the games initial announce trailer here. 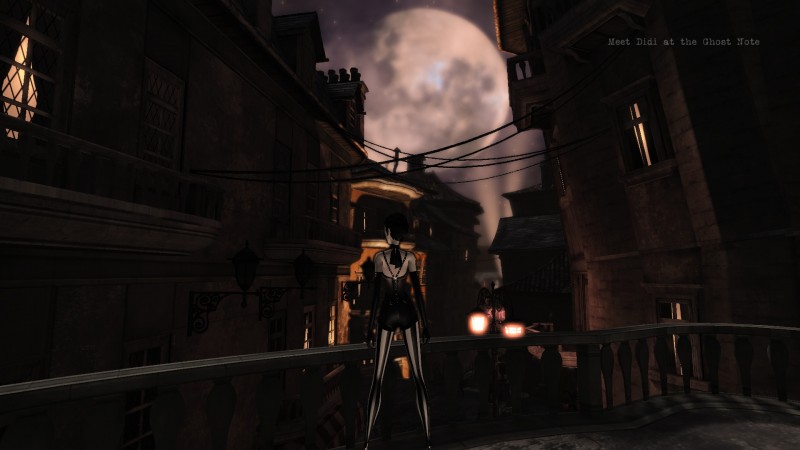