There is an argument that art comes from the immediate desires of the creator, which is a stance that makes sense after checking out Concrete Genie’s art creation. We got to sit down with the developers, Pixelopus, as they showed off how painting the town red worked in the PlayStation 4 game.

In Concrete Genie, the world is truly your canvas, with every wall in the otherwise grey and drag city functioning as an open space for you to place your art. Your main character, Ash, interacts with walls with his magic brush and paints pictures using themed stamps and templates to create moving 2D tableaus. Placing a waterfall on the wall creates a small pool at the bottom of the wall, the sun lights up various other placed objects, and flowers look super pretty.

There is no limit to what you can create - or at least not one the developers have hit yet.

The initial theme Pixelopus showed us, Landscape, focused primarily on the flora and environment that would make up a landscape painting. They confirmed that there are more themes and objects that can be found and unlocked as the player progresses through the game, allowing budding artists to mix and match themes and objects. The themes gets more varied and tonally darker as Ash collects them, reflecting his emotional state in the story.

Environments are not the focus of Ash’s paintings, however, as he also has the ability to give life to creatures. Ash creates creatures to solve puzzles in the game, but they represent his friends at a time where he faces constant bullying. How you draw the creatures (big, small, bipedal, quadraped) affects how they move and their personalities. Even the color you choose when you bring them to life determines how they behave, as well as their elemental affinities for puzzle solving. Creatures interact with each other and the environment, depending on their personalities. Pixelopus remarked that, when making the trailer for the game, certain creatures unexpectedly photobombed their perfect shots because their AI allowed for that behavior.

The creatures and other parts of the 2D art are still affected by physics, something Pixelopus told us was aided by sister studio Media Molecule after seeing their game. The Dreams developer lended some of their internal physics tech to Pixelopus, which results in an extremely cool look and feel to the paintings.

While they weren’t shown, the developer explained that the paintings are affected by Ash’s bullies in the city, something hinted at by the game’s first trailer. The bullies also affect the various ways the creatures behave, indicating that the friend you spent so long on creating and growing might be in danger if left alone.

Concrete Genie is built on the Unreal Engine and looks completely unlike any other Unreal game out there. The paintings you can make burst with a creativity that is completely unexpected when you first look at the blank canvases around you in a dark city square. I am very eager to get my hands on it.

Concrete Genie is scheduled for 2018 exclusively on the PlayStation 4. 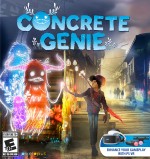