There Are More Than Tanks On This Battlefield
by Jeff Cork on May 31, 2013 at 05:37 AM
Publisher: Sega
Developer: Relic Entertainment
Release: June 25, 2013
Rating: Mature
Platform: PC Tanks have played a large role in the Company of Heroes history, but new publisher Sega wants to remind players that the armored behemoths aren't the only major players in the sequel. A new Company of Heroes 2 trailer shows off a variety of new threats, including the merciless cold of the Russian winter.

Company of Heroes 2 puts players in the role of a Russian Army commander working to destroy the invading Nazi forces. As you can see in the clip below, destructible environments play a large role in the game, both in terms of opening up battlefield strategies and also making heavy armor feel as powerful as it should.

For another look at Company of Heroes 2, check out this developer diary, which digs into the game's multiplayer. You'll be able to get your hands on this much-anticipated sequel on June 25, 2013. 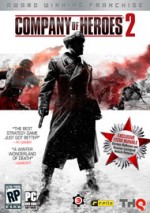