It sounds weird that Codemasters is remaking a 2001 game for iOS devices. After all, the iPad, for instance, is a pretty powerful tablet that can do a lot better than a grainy PlayStation-era game. However, Colin McRae Racing is less about porting an old title than offering a baseline rally experience that has its problems, but manages to offer up some fun moments every now and again.

The game's modes are pretty basic, with the Championship series being the only one worth racing – there are no multiplayer options other than leaderboards in Apple's Game Center. In the Championship mode you can go through multi-stage rally races complete with the chance to repair your car's damage every two stages.

Colin McRae uses either onscreen steering icons or tilt control for your car, but I only recommend the latter. However, even driving this way is not as precise as I'd like. Nuanced inputs aren't possible, which means you're forced to make more wild steering motions at times when you'd rather not. Still, the game does manage to offer some honest rally moments. Control criticisms aside, it's still possible to slide your way through a corner with satisfaction. I also had trouble getting used to the onscreen brake and e-brake controls. While it's nice that they can be manually moved around to anywhere on the screen, I found that while I was using them they slid around too much. Before long my brake pedal would often end up right on top of the e-brake.

The game also features some wildly bouncy physics which means jumps usually send you somersaulting in mid-air. Between this and the lack of finely tuned control, I tended to be very cautious when racing in the game; easing off the throttle a lot and tapping the brakes. While this may sound prudent if I was driving at dangerous speeds in real-life, for a rally video game it's unacceptably prudish behavior.

When it comes to the actual driving, I prefer the fidelity of EA's Real Racing 3, but at only $4.99 Colin McRae Rally is worth considering. Its overall feature package and execution may be a bit basic, but it did offer up a few moments worthy of rally racing.

Note: I've heard of some users complain about not being able to advance past the Australian Rally stage. In my play time I encountered this once – I had to play through it twice before it let me continue. 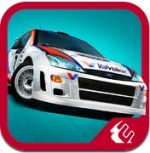