The release of the Oculus Rift will coincide with a hefty lineup of 30 launch titles. Gunfire Games’ Chronos distinctly stands out from the pack with its haunting atmosphere and third-person combat that hinges on a unique time-based mechanic.

In Chronos, humanity has been fractured into small tribes spread across the land. The tribal matron selects you to enter an ancient labyrinth to destroy the evil dragon that has plagued mankind.

This may sound like a well-trodden narrative path, but what sets Chronos apart from a standard fantasy tale is its relationship with death and time. A portal to the ancient labyrinth only opens once a year, and each death means that you'll be transported back. Your character will be forced to wait a year, which passes instantaneously while you respawn.

The narrative loop of having your character age after every death has implications for Chronos' gameplay. The trailer shows your character change from a young man to a seasoned gray-haired warrior, and this effects how you level your character. Strength and agility come easier when you're young, and arcane wisdom comes with age.

We got our hands on seven Oculus Rift titles, and Chronos was an outstanding entry on our list, which you can check out here. To find out more about why this is the year of VR, click the banner below. 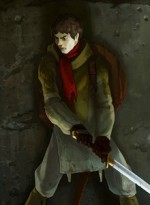