While much has been made of Catherine's focus on telling the story of Vincent, a man torn apart by guilt and indecision in a love triangle between two women with similar names, not a lot has been of the game's actual gameplay. During Vincent's nightmares, he'll be tasked with climbing an endless tower by rearranging blocks. And when he dies -- oh, and he will die -- you'll be greeted with the dramatic screen above.

This new group of screenshots also shows off some of the sheep companions Vincent will come across, including the helpful Merchant Sheep, who will sell him items. By talking with the sheep in safe areas, Vincent will be able to learn new strategies for tackling the increasingly difficult puzzles ahead.

Check out the screens below, and if you want to see the game in action take a look at Joe's video walkthrough of the first 45 minutes. 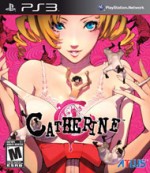