New "Zombies In Spaceland" Mode Will Be Playable Next Month At The Call Of Duty XP Event
by Blake Hester on Aug 16, 2016 at 10:30 AM
Publisher: Activision
Developer: Infinity Ward
Release: November 4, 2016
Rating: Mature
Platform: PlayStation 4, Xbox One, PC 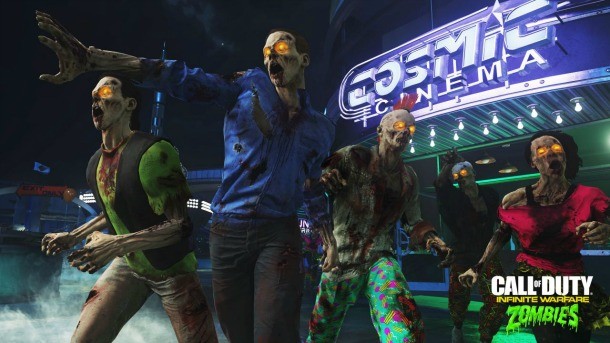 The survival mode drops players into a space-themed amusement park overrun with the living dead. After being transported into a horror movie by director Willard Wyler, players assume the role one of four eighties archetypes (the jock, the nerd, the rapper, and the valley girl). Zombies In Spaceland tasks players with fighting back waves of zombies, doing their best to make it out of the horror they've been trapped in. The mode will feature voice talent by David Hasselhoff, Seth Green, Paul Reubens, Ike Barinholtz, Jay Pharoah and Sasheer Zamata.

More information on Zombies In Spaceland will be broadcast tomorrow at 9:00am PT (12:00pm ET) on Call Of Duty's official Twitch, Facebook, and YouTube channels. It will also be playable next month at the Call Of Duty XP event.

For more on Call Of Duty, check out why Infinite Warfare's space battles are more grounded than you think. Or click the hub below to see all of our cover content from June. Infinite Warfare is expected to release for PlayStation 4, Xbox One, and PC on November 4.