After developing two by-the-book Call of Duty entries set in World War II, Treyarch finally flexed its creative muscles with Black Ops. That installment introduced a new Cold War setting, a more focused narrative, and a well-received currency system for multiplayer. These alterations to the series formula worked, and Black Ops set sales records upon its release. After this massive success, Activision seems comfortable with letting Treyarch take much bigger risks with Black Ops II. A near-future setting and significant changes to the campaign experience are just two of the factors that make this sequel the biggest shake-up in the series since Call of Duty 4.

In a move that few saw coming, Black Ops II primarily takes place in 2025. Players assume the role of David Mason, the son of the first game’s protagonist. This won’t be the only Mason you control, however, as his father Alex appears in flashback sequences set in the 1980s. As a direct sequel to Black Ops, Treyarch promises the return of familiar faces, including Frank Woods, who was presumed dead. The grizzled veteran accompanies Alex during a flashback sequence in Afghanistan. Treyarch studio head Mark Lamia tells me he appears as a “very old man” in 2025 as well.

As expected, the world of Black Ops II is in rough shape. In researching the future of global conflict, Treyarch reached out to military expert Peter Singer (author of Wired For War: The Robotics Revolution and Conflict in the 21st Century) to explore the factors that may likely lead to future wars. Treyarch learned that the resources most likely to cause tension are called rare earth elements, a theory that is backed up by a recent speech by U.S President Barack Obama on the subject. These rare metals are vital for the production of personal electronics (iPhones, televisions), alternate energy resources (wind turbines, hybrid cars), and advanced military technology (missile guidance systems, stealth bombers). In real-world 2012, China is the supplier of 95-percent of these elements. In the narrative of Black Ops II, the demand for these materials is the basis of a new Cold War.

With tension between the United States and China at an all-time high, it’s the perfect time for a sinister opportunist to make his move. Raul Menendez serves as your primary foe throughout the game, but game director Dave Anthony is hesitant to reveal many details about the Nicaraguan militant. A comparison was made to Tony Soprano, with Anthony saying “He’s the main character of [The Sopranos], but he’s essentially a villain. He’s a murderer, he’s cold-blooded, he’s ruthless...but he’s somebody you understand as a human being. You’ll find yourself understanding him as a human being and empathizing, but in the next moment, you’ll see him do something utterly outside the realm of anything you could contemplate doing.”

Throughout the story of Black Ops II, Menendez uses near-future technology to cause further unrest in the unstable geopolitical climate. One late-game mission sees the antagonist using an armada of unmanned drone aircraft to attack the G-20 summit in downtown Los Angeles. The Chinese know they didn’t send the drones, and their confusion is amplified when U.S. drones are sent to attack their homeland. We don’t yet know Menendez’s motives, but the mission we saw made his destructive capabilities more than apparent.

With half of L.A. in flames, the mission begins with David Mason protecting the female President of the United States in the back of a transport vehicle. Treyarch wants the future in Black Ops II to seem plausible, so the skyline resembles modern-day Los Angeles far more than the kind of futuristic cityscape you’d see in The Fifth Element. The scene on the streets makes Michael Bay movies seem subtle, with dozens of aircraft, numerous armed vehicles, and countless foot soldiers contributing to the overwhelming chaos. Mason’s vehicle narrowly avoids numerous explosions and crashes on its way to the city, but eventually finds itself in a nasty collision. Crawling out of the wreckage, Mason spots an AA gun on top of an army vehicle that’s perilously perched over a hole in the highway. He mounts the gun, locks on to seven enemy drones at once, and shoots them out of the sky. Mason repeats this process for several other groups of drones before it becomes clear that the vehicle he’s on top of is about to plunge through the highway to the ground below. After leaping to safety, our protagonist grabs his electrically charged (as opposed to gunpowder-based) assault rifle and prepares to take on Menendez’s ground forces. Within a few seconds of Mason’s feet hitting the ground, I saw something unusual for a Call of Duty game. Near the edge of the collapsed highway are two markers labeled “snipe” and “rappel”. Both options involve battling Menendez’s army, but players can choose their approach. Rappelling leads to the player sprinting from cover to cover and taking out the enemy in typical Call of Duty fashion, while sniping offers the chance to use some futuristic technology. If you opt for the latter, you get to try out a sniper rifle that can see through walls in a manner similar to Perfect Dark’s Farsight gun. This gives Mason a tactical advantage while sniping enemies through cover, but the weapon features the disadvantage of a slow recharge time. Even with this slight annoyance, the sniper option offers a more novel (and tactically safer) approach to the battle.

Once the immediate threat is contained, Mason hops into a nearby vehicle and resumes his beeline to the summit. Enemies flip over the car’s windshield and are crushed beneath its tires as it speeds down Figueroa past familiar sights like the L.A. Convention Center (home of the annual E3 convention) and Staples Center. After a semi truck plows through several cars while attempting to escape the city, Mason’s progress is blocked. He hops out of the car and continues to blast enemies on foot until he encounters a new enemy – the CLAW (Cognitive Land Assault Weapon). This four-legged robotic foe features mounted weapons and poses a significant risk until its legs are taken out. After using this tactic to disable the robot, Mason sprints towards cover in a nearby shopping mall.

There, he uses a touchscreen on his wrist to summon two flying turrets, called quad drones, to assist him. With three guns blazing instead of one, mowing down Menendez’s men seems temporarily easier. Support from the sky is welcome against these enemies, but it proves to be no help when a massive hotel topples down in front of Mason. In a scene that Call of Duty fans are familiar with, the player is knocked out and comes back to consciousness in a haze.

After the collapse, the scene in Los Angeles is eerily reminiscent of New York in the immediate aftermath of the September 11th attacks. Streets and vehicles are covered in dust and debris, with a thick cloud of ash lingering over everything in sight. Mason wanders for a bit before being instructed to enter the cockpit of a military VTOL (Vertical Take-Off and Landing), with a voice over the radio assuring him that the onboard computer will take care of most of the hard work. A nearby friendly vehicle is transporting a VIP (possibly the President), and the Harrier-like aircraft proves to be a valuable asset for clearing the path. In the process, it destroys a parking garage and causes a massive crane to crash into a skyscraper.

Eventually, the drones in the sky are deemed the primary threat. At this point, the aircraft switches from hover mode to jet mode, and a full-on dogfight begins. The player is given complete control over the plane, and the ensuing battle resembles something from Ace Combat rather than the on-rails air sequences from previous Call of Duty games. Mason’s mid-air fun comes to an abrupt end when an incoming missile forces him to eject from the craft, causing his body to violently slam into a building before continuing his descent to street level (and ending the presentation in the process). Even with the series’ long history of over-the-top action, this mission stands out as particularly chaotic. Thinking back over my time with each previous Call of Duty game, there aren’t many missions that feature more sheer mayhem. While the overall experience should be of comparable length to other installments, Treyarch is introducing new elements that should entice gamers to play through multiple times.

Dave Anthony was a huge fan of “choose your own adventure” books as a child, and he wants to bring a bit of that experience to Black Ops II. Branching paths will affect the storyline and ending of the game, and the decisions you make will be much more important than whether you sniped or rappelled in the Los Angeles stage. Characters can permanently die at predetermined points, and your actions in a brand-new mode will alter your campaign path.

Strike Force missions are presented throughout the course of the campaign, and they’re unlike anything seen before in the series. At certain points, players are presented with a choice of several missions that affect the overall global conflict. You can’t do all of them in one playthrough, so multiple completions of the game will be required to experience everything. The simple act of selecting between these missions isn’t the most novel aspect, however.

Call of Duty’s missions are criticized for being too linear, with characters and onscreen indicators leading you by the hand from objective to objective. By contrast, these Strike Force missions are more sandbox in nature and let players complete objectives in any order they desire. We saw one in action, with the endgame being the destruction of a large transport ship that’s about to leave a dock in Singapore. An airstrike is necessary to fully destroy the shipment, but three free electron lasers make the nearby airspace too dangerous for friendly aircraft. Players are dropped into action as a nameless soldier, and they’re free to take out the lasers in any fashion they deem appropriate.

Your choices aren’t limited to objective order; you can pull the camera out into Overwatch mode at any point and inhabit any friendly character. You can also assume control of flying quad drones, heavily armored CLAW robots, or anything else that happens to be on your side. If you feel like having more control of the overall skirmish, you can even play the entire mission in Overwatch mode, ordering squads and units around the map to your liking.

This mission operates on a 20-minute timer, and you fail if the shipment manages to leave the dock. If you can’t complete your objectives, the game doesn’t simply reset you to a previous checkpoint – failure is permanent and affects the story. I spoke with studio head Mark Lamia about the ramifications of this, and he says players will experience “radically different endings” depending on their performance in Strike Force missions.

Virtually all of Treyarch’s info at the event centered on the campaign, but game design director David Vonderhaar gave us a tease of their evolving multiplayer philosophy as well. He claimed that “one size doesn’t fit all anymore,” and that they’re trying to determine “which cows are sacred, and which cows can be sacrificed.” These vague comments should make more sense when the developer showcases multiplayer later in the year, but they indicate that a shake-up is in store for the series' popular online play. One thing that won’t be changing is the reappearance of the popular Zombies mode, which Treyarch is expanding with new modes and features.

Black Ops II is the ninth entry in the core Call of Duty series, and the changes Treyarch is making to the campaign structure are among the most significant yet. Fans have been calling for the series to make a substantial step forward for several installments now, and all signs point to it happening in this fall’s release. 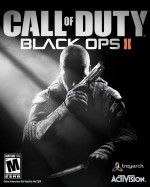