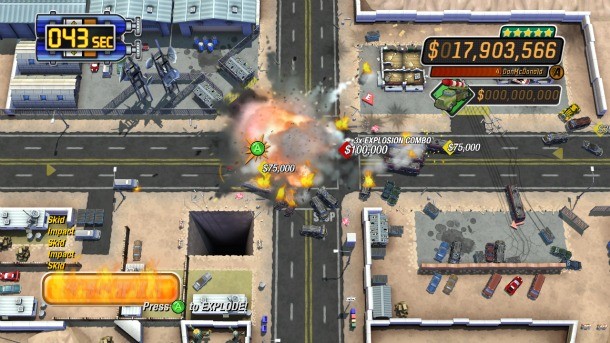 We spoke with the developer to get the full picture of how the classic game mode is becoming its own downloadable game.

We asked Richard Franke, the creative director on Burnout Crash, about the dramatic changes in store for the franchise in the new game. Specifically, Burnout Crash takes the familiar mode seen in games like Burnout 3 and pans the camera back to a top-down view, then sets players out to create the biggest and most expensive crashes they can manage.

Why did the team opt to shift the viewpoint from a traditional racing view to top-down?

Burnout Crash was built from the ground up to be about crashing, not racing. We were very conscious to allow the game total freedom to evolve and define what it became very organically and not be limited by previous incarnations of Crash mode.

We were heavily influenced by Pinball, and did a lot of experimentation with gameplay and scoring mechanisms that allowed the player to really strategise how they play the crash.

With all these mechanisms it really only felt right when the player could see the incoming traffic, and the layout of the buildings and other elements. Hence the top-down camera - you wouldn’t be able to play it satisfyingly any other way!

We’ve heard there are three central game modes in Burnout Crash. Can you describe these different modes?

Road Trip is the campaign mode that progresses you through the game. Your goal is to keep the crash going until 5 traffic vehicles escape, getting through the intersection unscathed. If you can keep the crash going long enough, special features will be triggered which will either make your life difficult or give you an opportunity to score big (at the risk of unblocking the lanes). These special features take the form of special vehicles such as the Bulldozer, special events such as Thunderstorms, and the Jackpot Super Feature which is a special prize for keeping the crash going for as long as possible.

In Rush Hour, you are tasked to cause as much destruction as a possible in 90 seconds. It’s a destruction free-for-all. If you crash enough traffic a Pizza Delivery Truck will drive through, and if you blow it up you get to spin the Pizza of Fortune, which triggers a random feature. After the 90 seconds is up your vehicle will explode and take out everything around it in a huge chain reaction, which can massively increase your score if you are in the right spot!

Pile Up is the mode most like traditional Crash Mode, much more strategic and puzzle like. A limited amount of traffic will drive through the intersection. When all the traffic has crashed or escaped you go into Inferno Mode. During Inferno all scores are multiplied by the Inferno multiplier, which is affected by the amount of traffic that escaped. Inferno only lasts as long as something is burning so keeping lots of unexploded ‘fuel’ (traffic and buildings) available till Inferno is the best strategy, but easier said than done. Pile Up is also the only mode where traffic does NOT disappear when it explodes, hence the name

Each mode is very simple to pick-up but difficult to master - strategic thinking will go a long way for racking up the big points.

How does music factor into the game experience in Burnout Crash? Any particular artists or styles of music you’re aiming to include?

I really wanted to make the music more than just a soundtrack that played in the background; I wanted it to enhance the game experience by tying it into the gameplay.

Once the game was pretty nailed down we chose some tracks that we felt really embodied the spirit of the game, and that most people will recognize. These were chosen to accompany certain gameplay events that the player will discover as they play through the game.

There really wasn’t a particular ‘theme’ except for the humor of the game. Burnout CRASH! has a lot of personality, so the tracks we chose had to be similarly outrageous and also well known, as we want them to make people smile when they hear them.

[Next up: Driving with no controller using Kinect] 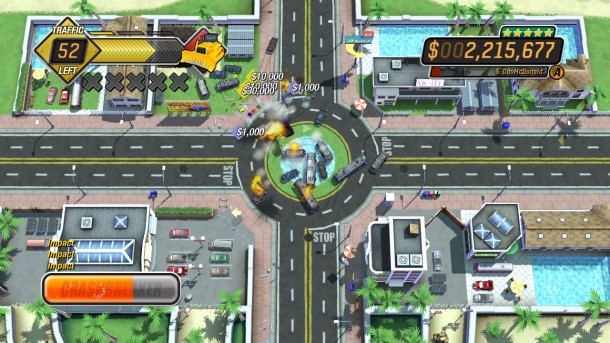 Earlier Burnout crash modes were enhanced by the option of choosing different vehicles to take into the crash. Do you have this same ability in Burnout Crash? If so, what vehicles are your favorites right now?

As you play through the game you’ll unlock vehicles that are lighter and more maneuverable but with a smaller Crashbreaker, and heavier vehicles which have a larger Crashbreaker. These become more extreme the further into the game you get.

My favorite depends on the game mode I’m playing; the light and maneuverable P12 Sport for Pile-Up or the heavily explosive Security Truck for Rush Hour. Though the intersection can also influence my decision.

Most of the vehicles you will recognize from Burnout Paradise, though we have added 2 new ones, the Strongbox security Truck, and the Trashmaster, which as I’m sure you can guess, is a Garbage Truck.

Can you describe a particular crash? How do you control the car? What are your objectives in the crash?  How might the crash play out differently for different players?

You drive into the intersection, and must hit a traffic vehicle to start the crash. Whilst driving you have an opportunity to score by driving through street furniture and getting a smash chain combo.

Once the crash starts, your priorities will depend on the mode you are playing, though it’s generally a good idea to block as many traffic lanes as possible so that you can venture off into the surrounding area and score some bonus points for destroying buildings, and hitting some of the more expensive traffic parked on the periphery.

One thing to bear in mind of course is that each intersection is laid out differently so keeping the lanes blocked will be more challenging in some than others, and the bonus items will require different strategies.

Also worth remembering is that traffic vehicles will only take so much damage before catching fire and exploding. This can set off explosive chain reactions which will clear the road lanes allowing new traffic to get through, so getting back to block the traffic can become a priority at any time!

This system makes the gameplay very emergent, so every play will pan out differently, making the game eminently replayable.

While crash mode has always been thrilling for its ability to let anyone pick it up and have a big car crash, serious players have been able to find deeper layers of strategy and control to maximize their score. Does Burnout Crash aim to offer a simpler experience, or do you feel it still has those more complex layers? If so, what are some of the things those more devoted players can look forward to mastering?

Burnout Crash maintains the pick up and play approachability that people loved about crash mode, but is way deeper than any previous incarnations.

There are many and varied ways to increase your score, such as explosion combos (multiple vehicles exploding simultaneously), explosion chains (traffic explosions setting each other off in a row), Skillshots (using the Crashbreaker to punt vehicles into one another, or into holes) and of course all the buildings which are destroyable, and the bonus parked vehicles hidden in each intersection. On top of that you can also jump down a hole to drive into the intersection again while the crash continues, and get more smash chains in the process.

Each game mode also will affect the decisions the player makes and their approach to trashing the intersection so all in all there is a massive amount of satisfaction to delving deep into the gameplay.

What multiplayer features are included in Burnout Crash?

In Burnout Crash we’ve included the award-winning Autolog technology introduced by Criterion in Need for Speed Hot Pursuit. Not only will you be able to connect, compete and compare high score with your friends, but with our new Autolog Challenges feature, you will also be able to send head-to head challenges to your friends.

Also, with Kinect Party Play, we are able to bring the multiplayer competition right into your living room in an epic way. Burnout Crash will support up to 14 players, split into 2 teams. Using motion controls only, each team will have to work together to see who can cause the most traffic chaos.

Can you describe the Kinect functionality of the game on the 360 version?

The Kinect controls are easy to pick and intuitive.

As you drive towards the intersection, you hold your hands out as if you were steering a wheel to control the car.

Once crashed, you can influence the direction the car will move by simply moving around the play space, then jumping to fire the Crashbreaker to push the car in that direction.

In Kinect Party mode we’ve added additional silly gestures for the Crashbreaker to make sure that your friends are especially amused watching you.

Thanks to Criterion's Richard Franke for answering our questions about the game. Check back in the coming weeks as we get more info on this surprising new installment in the Burnout franchise, and let us know what you think of the game in the comments below.