We recently had the opportunity to talk with Tanya Jessen, producer of Bulletstorm. Jessen spent a tremendous amount of time working with People Can Fly in Poland, collaborating with writer Rick Remender, and doing all other things Bulletstorm. Check out our interview with her as we discuss Bulletstorm's position in the crowded FPS market, establishing the game's comedic tone, and getting players familiar with the game's mechanics.

GI: Is there been any fear that gamers won’t pick up on Bulletstorm’s satirical tone and that it will fall under the “just another FPS” blanket?

TJ: Absolutely. One of the most terrifying things for us in general is that people won’t get it, and that they’ll take it very, very seriously. We want you to take it seriously in terms of the fact that we think it’s a fun game, like you want to play it with your friends and talk about it and all that, but in terms of saying it’s like Call of Duty or something like that which has very serious tone, we’re definitely not that game. I feel like after the demo came out, even though there’s not a lot of story stuff in there, people seemed to get it. The comments that I’ve been reading imply that people kind of get where we’re going. That fear has been alleviated a little bit, but it won’t be fully until you guys put out your reviews.

GI: If Epic Games and People Can Fly find success with the quirky risk-taking of Bulletstorm, is there a chance it could open the door for non-shooter games?

TJ: At the end of the day the games we make are driven by the people. It’s really like, “what does the team want to work on?” The reason we make shooters is because that’s what the team wants to work on. The reason they look the way they do is because that’s the way our artists and programmers and designers want them to look. I don’t really have any clue how that could change in the future. In particular, with Bulletstorm, People Can Fly - since they became a part of the Epic family - they have this completely different perspective, it’s a completely different group of people who worked on Painkiller. So with our powers combined, we got to make Bulletstorm. But the direction it went was a big part of People Can Fly’s vision.

GI: Bulletstorm doesn’t have a competitive multiplayer element. What do you think about Bulletstorm’s position against other popular competitive online shooters?

TJ: The thing about multiplayer is first of all that we pretty well established that Bulletstorm is not like every other shooter. That especially applied to multiplayer. You can’t just take the game as it is and put two dudes in a room and have them leash, kick, slide, shoot, and flail-wrap each other. I mean, you can, but is it fun? We worked on it for a long time because of course we wanted it to work, but at the end of the day we weren’t going to add a feature just because people expected it. What we wanted in multiplayer was something that was totally different. It’s something that really, really fits with what Bullestorm is. That was skillshots, that was the points system, there was it being cooperation-based, there’s a whole new layer of f***ed up s*** that can happen because you’re working with your friends to play as opposed to it just being all about you. It’s also about discovery because every map has its own environmental skillshots. What we felt was that we would rather not dumb down the feature set and take out all the stuff that makes Bulletstorm really cool in order to have a PvP. Instead, we did something that was really tailor made for the game of Bulletstorm.

GI: Considering the skillshot-focused marketing campaign, many people will likely be surprised by the amount of story in Bulletstorm. Can you tell me about the choice to front load the game with a healthy amount of cutscenes and quicktime events?

TJ: We had a really hard time launching the game primarily because we knew we were doing something totally new. We needed to get people comfortable with what that was. Not only that, but it’s kind of a teaching process because we need everyone to understand that Bulletstorm is not Halo, it’s not Gears, it’s not Call of Duty, and you can’t play it that way. So we focused very heavily on that. The tone naturally became part of that because that’s a big part of what our game is. So much of the marketing focus had went to that…we talked about story as much as we could, but I think it kind of got lost in the gameplay. I think people will hopefully be pleasantly surprised with the game they play. Like you said, I don’t think people will be expecting it, and hopefully they will really enjoy it, and hopefully that’s what they want…a cohesive game that they really enjoy playing that isn’t just “do cool s***, do cool s***!” There’s absolutely a ton of that in our game, but we knew from the very beginning that we wanted a very strong sense of character and to have a good story. It hasn’t really been talked about because we’ve been focusing on “how are you going to teach everyone how to use this leash thing and skillpoints and kicking, and it’s about toying with the enemy, not killing the enemy,” and all of that stuff. That’s why the first 45 minutes are the way they are. First of all, we want to show you what’s it like not to have that, then to get all of those things.”

TJ: Exactly. Hopefully that solidifies in your mind “oh, I have to leash guys and impale them,” then you immediately see what happens when you do that.

GI: Are there plans to expand the Bulletstorm brand?

TJ: We’ve already been doing some of that stuff, with the Gray action figure that Neca has done for us. With Gears and with UT we always look for opportunities – we don’t make any money on that stuff, but we love comics. And how awesome is it to have a t-shirt that’s being sold in Target that has your game’s name on it? Basically, it’s going to depend on the popularity of the game.

TJ: He was in MadWorld and was a lieutenant’s voice in Call of Duty, but outside of that, before like this last year and a half or so he did mostly anime stuff like Wolverine for X-men, Spike Spiegel from Cowboy Bebop. And there’s actually an amazing episode – I found it accidentally, this is so cool – Jenny Hale is Trishkka, and I was telling somebody “yeah, Steve Blum is Spike Spiegel,” and they were like “no way!” So we watched the first Cowboy Bebop clip that came up on YouTube. It was a clip of Jenny Hale and Steve Blum in a fight scene.

GI: So they’ve worked together.

TJ: Yeah, I didn’t even know that! It was totally random and awesome. And Jenny Hale, of course she was Commander Sheppard and in the Power Puff Girls. She’s done tons of stuff.

GI: Bullestorm’s writer is Rick Remender. Can you tell me what went into creating the unified sense of humor the game has?

TJ: The skillshots themselves were not done by Rick, they were done by the design team. A lot of people were always contributing ideas. I’m pretty sure everybody on the team got something in there. It’s funny because 90% of the people from People Can Fly are Polish, so I think that helped us in a lot of ways, because it’s like pop culture and the things that they know from American culture. It translates well, because the thing with skillshots is that the moment they pop they need to be instantly recognizable. It doesn’t feel like “oh crap, what was that skillshot?” It still has to be in the tone of the game. It has to be short. I think they did an amazing job coming up with the skillshot names.

The game itself it was kind of an interesting process because when we hired Rick we had really solidified the game that we wanted to make in terms of the gameplay. So we had some environments in mind, we had kind of a storyline that we wanted, but nothing that was definitive. But the core gameplay, the leashing, sliding, kicking, and skillshots, we knew that was what we wanted. When we first hired Rick we flew him out to Poland and it was me, him, and Adrian [Chmielarz, founder of People Can Fly]. We holed ourselves up in a conference room for a week and we just threw every prior concept we had out the door because we really wanted Rick to put his spin on everything. Since he was the driver of tone we felt like it had to be that way or it would be hacked together. We literally started working on some of our ideas from scratch and once we had nailed all of our high level concepts we started working on the level shells - which are the very base levels with no art or anything – based on what we had talked about. So what Adrian would do is as soon as a shell had been scripted and he had seen some of the stuff he wanted, he would record it and talk over it, like do a walkthrough. Then we would send that to Rick and he would write a script and the dialogue exactly to the walkthrough ideas. He knew exactly what was happening and when it was happening; he knew how the level was supposed to look, he had all of Adrian’s back story. So we did that two or three times throughout the process. We would update the level, look at the video, send it to him, and we would make tweaks on the dialogue and do another recording session, so that it felt cohesive and that it never felt like “oh, that was random. Why did they say that there?”

We went all or nothing. We weren’t willing to compromise on that and Rick definitely was a huge part of it. I think it was a good way to go about it but it was insane, because games aren’t usually made that way. It was a really great process. I think I would want to do that process again for other projects I work on. When you’re trying to focus on gameplay you have to work together very well. Rick had lots of great ideas and we would already be doing something and we had to go “alright, how can we make this all work together?” I think it ended up pretty good. 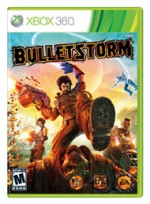