Brütal Legend has traveled a rocky road to rock stardom. The wheels briefly fell off creator Tim Schafer’s tour bus when Vivendi unexpectedly merged with Activision, leaving the game in limbo. When the multibillion-dollar deal was confirmed, after much deliberation Activision dropped several Vivendi titles from the new company’s roster, including Brütal Legend. Like any good crew of rock ‘n’ roll rebels, developer Double Fine dusted itself off and shopped the game to other publishers. Thankfully, it ended up in the capable hands of EA Partners, the division of the publishing giant that had already found world-beating musical success with MTV and Harmonix’s Rock Band series. However, like a spurned baby mama, in June Activision reentered the picture with a lawsuit, contesting that the company “still has a valid contract to release the game,” and were therefore owed payments from EA before the game could be published. Frankly, it’s enough for a pretty kick-ass episode of VH1’s Behind the Music.

So far none of the slings and arrows have been powerful enough to hold back the metal. At press time, EA assures us the game is on target to hit its announced “Rocktober” 13 release date. As proof, we recently sat down with the first “content complete” alpha build of the game for some exclusive hands-on gameplay. We’ve already taken you through some of the early parts of the game [see issue 194], but here’s a quick recap. You are Eddie Riggs, the world’s greatest roadie who’s stuck working for a crappy nü-metal band. In the midst of a stage setup, Riggs gets blood on his rad, Mötorhead-style belt buckle. As it happens, this belt buckle is actually the Earthly manifestation of the fire god Ormagöden and functions as a portal to another dimension. Got it? Well…yeah, honestly it doesn’t really matter that much. What’s important is that Eddie gets transported to this new world – one that draws much of its visual inspiration from the album artwork of such legendary metal artists as Dio and Iron Maiden – and begins a grand rock ‘n’ roll adventure.

The demon emperor Doviculus rules this realm, and controls the masses of enslaved headbangers by the hand of his hair metal puppet General Lionwhyte (voiced by Judas Priest’s Rob Halford in a highly inspired turn). In the rock tradition of defiance, a small band of revolutionaries holds out hope, led by Lars and Lita Halford. As soon as he lands in this strange place, Eddie becomes embroiled in this conflict by a chance meeting with Ophelia, a member of the resistance who is also our hero’s love interest.

While the initial premise is right out of a clichéd concept album, during our playthrough Schafer drops some hints that all is not as it seems. While the resistance sees Eddie as the “chosen one,” the local lore is unclear as to whether that chosen one would come to save or destroy the world. Ophelia herself seems to have some inner doubts about Eddie as well, based on something she learned from her own mysterious parents.

As always, Schafer’s dialogue shines. The game is filled with nods to metal history, as when The Killmaster (the game’s healer, voiced and based off legendary Mötorhead bassist Lemmy Kilmister) shouts Mötorhead’s slogan “Everything louder than everything else” during a battle. Jack Black hits the role of Eddie out of the park – although Brütal Legend is so deep in his wheelhouse that it may as well be a fat hanging curve ball for the Tenacious D star. We were especially happy to see a brief cameo by his partner in crime Kyle Gass of Tenacious D, hilariously cast as a neurotic giant cannon operator. Gamers will meet a couple of other high-profile stars through the story as well, most notably Ozzy Osbourne, who runs the Motor Forge, a fiery lair that serves as the hub where you can upgrade your character’s stats, moves, and add weapons and engines to your hot rod, The Deuce. We were surprised to find that the famously incoherent Osbourne was actually easier to understand than his fellow U.K. rock icon Lemmy. Once Eddie realizes that the headbangers slaving away in Lionwhyte’s mines need only to be freed by the power of metal, he leads the resistance from its headquarters of Bladehenge to take on the stifling hair metal aristocracy.

The basics of melee combat are standard. Eddie has two main implements of destruction – the Separator (his axe) and Clementine (his Flying V guitar). The Separator handles a range of melee attacks that can be unlocked in the Motor Forge by spending Lighter Tributes (Brütal Legend’s in-game currency). Clementine casts magical spells, and serves as Eddie’s ranged attack (trust us, in the larger battles you’ll rely on her a lot). Again, she can be upgraded with new combos, spells, and even improved stats.

Many casual observers might be surprised to know that Brütal Legend doesn’t actually focus solely on hack ‘n’ slash combat. Rather, there are a good number of combat sequences called “Stage Battles,” large-scale troop warfare that falls somewhere between RTS and Ozzfest.

The stage battles begin after your crew of misfit rebels goes on tour (as an army called “Ironheade”) in a giant tour bus driven by your trusty (if a bit addled) friend Magus. By this point in the game, Eddie’s gang is a fully functioning wrecking crew with a number of different unit types. The headbangers are your meat-and-potatoes fodder; these loyal lunks are always necessary for a good fracas. The Razor Girls resemble extras from Dazed and Confused, favoring feathered hair, three-quarter length concert t-shirts, and flares. These rock chicks focus on ranged attacks, shooting at enemies with guns ripped from the guts of some strange metal boars that roam the countryside. In addition to aforementioned Killmaster (whose three-wheeled motorcycle allows you to heal your troops), the last new unit we saw is the Roadie. These journeymen of rock are the closest to Eddie’s heart, and have some unique abilities. Since roadies stick to the shadows and never steal the spotlight, they are actually invisible to enemies, even as they creep along with giant amps on their backs. Even better, they have a very powerful co-op move when teamed with Eddie that emits an earsplitting sonic attack. Co-op attacks with any unit can be performed by running up to that unit and hitting the Y or triangle button.

The battles unfold much like setting up for a concert – give or take tons of blood and destruction. First, your crew builds a giant concert stage that serves as your base. From here you must gain control of nodes called “fan geysers.” These piles of rubble are being feasted on by giant worms that gain sustenance from the spirits of the fans contained within. By killing the worms, you can erect large merch booths on these sites, which feed fan spirit back to your stage. This is important because fans actually give you the ability to raise more units, thereby making defending your merch booths an important task.

The commands are fairly conventional, simple attack/defend/follow style inputs on the d-pad. You can also observe the battlefield from a much different perspective. You see, there’s a little more to our hero Eddie. And by “a little more” we mean two gigantic demon wings that allow him to fly above the fray and issue commands to his rock soldiers on the ground. This also begs a few questions about Eddie’s background and how he fits into the lore of the world, but sadly we did not get to see them answered. Based on our time with this latest build of Brütal Legend, a few things are clear. One, the game is very good at doing the things for which Tim Schafer is known. The characters are funny and sharply drawn. The dialogue is snappy and humorous – and all the more impactful for the exceptional facial animations in the cutscenes, which are created by ex-Pixar staffer Tasha Harris.

More importantly, it creates an inviting world. This place literally drips with rock iconography, from Mt. Rockmore (which you can customize with giant stone visages of Eddie and other characters from the game) to the Screaming Wall, a seaside cliff made entirely of amplifiers. As Eddie, Jack Black makes an ingratiating lead character, and Rob Halford surprises with a catty turn as the vain Lionwhyte. The setting, story, characters, and soundtrack all help to make a game that is uniquely single-minded in its devotion to all things metal.

However, this (admittedly early) alpha build was not without its problems. At times, the Stage Battles were chaotic and we often had trouble getting our units to do exactly what we wanted. It was frustrating, especially given how easy it was for Eddie to die if we engaged in hand-to-hand combat. For Brütal Legend to reach its considerably potential, there is some work to be done.

That said, EA has the resources, staff, and time to polish this game into a multi-platinum hit. If the kinks can be ironed out by October 13, we will receive a game that offers equal portions of charm and depth. And rock. Lots and lots of rock. 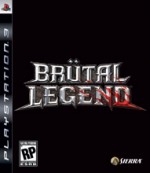