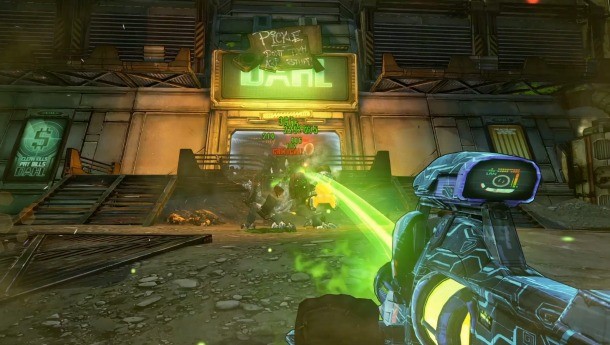 With Borderlands: The Pre-Sequel out next week, 2K Games is wrapping up its four-part behind the scenes look at the game. They’ve covered the partnership between Gearbox and 2K Australia, moving the action to the moon, and the characters. Today, we get to look more closely at the weapons.

Borderlands: The Pre-Sequel adds one new weapon type (lasers) and a new element (cryo). There are four different lasers that all take cues from sci-fi stalwarts.

Maliwan lasers riff on Ghostbusters proton packs, with beams that oscillate and dance, but are continuous streams. Hyperion’s are more like a rail gun. Dahl is your typical laser blaster ripped right out of Star Wars. Finally, Tediore weapons operate like laser shotguns, splitting into multiple beams.

Borderlands: The Pre-Sequel is out on October 14 for PlayStation 3, Xbox 360, and PC. For more, you can read our most recent preview, during which we took Claptrap for a spin.