You may not have taken time to look up at the sky while playing Borderlands and Borderlands 2. Really, who could blame you? Those midget bandits drag your camera down just a bit lower. But if you have gazed at Pandora’s moon or the Hyperion moon base, you might have had dreams of visiting.

Borderlands: The Pre-Sequel will move the action from the surface of Pandora to the planet’s satellite. The 2K Australia-led title takes place before Borderlands 2, but after Borderlands 1. It’s a Pre-Sequel. Get it?

It’s also not the next-gen Borderlands you’re waiting for. This title is coming to PlayStation 3, Xbox 360, and PC sometime in fall 2014.

With the new adventure comes a slate of four new player characters, led by a pre-villainous Handsome Jack. This time out, each of the choices are more than just RPG classes. They are fleshed out characters, and you’ve met them all before.

We first encountered Athena, the gladiator, during the Secret Armory of General Knoxx DLC. We saw the most of her and her “Kinetic Aspis” active ability during our demo.

When triggered, Athena raises a shield that collects incoming fire. When the timer runs out (or the ability is ended manually), she throws the shield dealing damage based on the absorbed damage. The final ability on her Phalanx tree lets her ricochet the shield like Captain America.

Wilhelm, the enforcer, will be familiar to Borderlands 2 players. He was one of the first bosses in that title, appearing as a half-man/half-machine monstrosity. In The Pre-Sequel, Wilhelm will progress from man to cyborg as he levels up.

Each of the characters will be more than templates this time around. They’ll have more dialog and their own story arcs. Choosing four characters that already have a place in the Borderlands universe is risky, but it has the potential to pay off big with player engagement.

2K Australia is also putting their mark on the Borderlands franchise by introducing new gameplay features. Since we’ll be traveling to the moon, we’ll need to contend with low gravity and a severe lack of oxygen. I particularly enjoyed the co-op partner’s long stride and bounding animation as he ran across the terrain.

A new element has been added to the hud representing your oxygen reserves. This precious resources is captured and managed by “oz kits.” You’ll replenish your breathable atmosphere by entering shielded structures, but also by standing over vents in the moon’s surface.

Oxygen isn’t just for breathing, though. You can use your oz kit to double jump and float down even more slowly. Low gravity will make you a target in mid-air, though. That’s why 2K Australia included the ability to ground pound by holding the crouch button while in mid-air. Landing like this will stun enemies that are too close.

Of course, this wouldn’t be Borderlands without new ways to maim and dispose of your foes. 2K Australia has added a new class of weapons fit for any moonbase: lasers.

These come in a variety of different types, including Star Wars-inspired blasters and sustained beam weapons that look like a Ghostbusters positron collider. Lasers do more damage in oxygen-rich environments where they can set fire to the air.

You’ll also find weapons with the new cryo element. These slow and then freeze foes with sustained fire. Once entombed, they can be shattered. There is at least one new vehicle, the stingray, for getting around the moon. This quad hover bike will help you get around the surface.

The profile-spanning badass ranks that players earn by completing challenges is getting an overhaul. There has been some talk of revising other systems as well, though Gearbox isn’t ready to talk about those quite yet.

Gearbox and 2K Australia say that this is a full game, and players can expect content on par with the first two outings. The title is being co-developed, with members of the Gearbox team embedded at 2K Australia and vice versa. The writing and voice overs are being handled collaboratively.

The result is that the “culture” of the enemies on the moon is heavily influenced by Australian humor. Those on the Hyperion moon base are flavored with traditional Gearbox jocularity, with scribe Anthony Burch at the helm.

“We have a lot of Australian culture to definitely tap,” says 2K Australia general manager Tony Lawrence. “There are some of the characters in there that kind of had Australian accents. We were recording VO in the studio and sending those milestones off to Gearbox and they said, ‘that sounds cool. Keep that!’”

“It very quickly became that the inhabitants of the moon are Australian,” Pitchford told us.

“The moon surface is all Australian gags for the most part,” Burch added. “It’s a very different sensibility compared to our very westernized fart jokes and screaming at the player kind of thing. And when you go the moon base later in the game, that’s more of the internal Gearbox writing happening. My hope is that the game is going to come out with more comedic variance than Borderlands 2 had.”

While there is a great deal of collaboration happening between Gearbox and 2K Australia, the latter is being given a great deal of flexibility. Lawrence and his team were given only the basic framework within which to create the title. The studio has a history of working with shooters and teamed up with Irrational Games for BioShock Infinite.

It’s early to be talking about DLC for Borderlands: The Pre-Sequel, but with Gearbox’s history of support for the franchise, we inquired nonetheless. “I think we’ve created a lot of expectations there,” says Gearbox president Randy Pitchford. “Right now all of our energy is on the game. I think we expect that. We expect to do more. We don’t know what it is, and we haven’t spent any energy on that yet, but I think it’s a fair expectation and I’d be sad if we didn’t live up to it.”

Borderlands: The Pre-Sequel might not be the game fans have been clamoring for. But with a fresh perspective from 2K Australia, a new setting with inherent gameplay quirks, and more Handsome Jack, we’re looking forward to our trip to the moon. 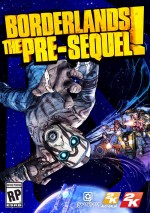