Irrational Games has revealed a new tidbit for the second part of its return to Rapture. Burial at Sea Part Two is out in March, and its bringing an iconic weapon from the original BioShock.

Unfortunately, Elizabeth won’t have the electrified trap bolts at her disposal. She will have three different kinds of ammunition, though. We can figure out what the tranquilizer and noisemaker bolts will do. It’s not quite as clear what purpose the gas bolts serve.

We’ll find out for sure on March 25, when Episode Two of Burial at Sea arrives for PlayStation 3, Xbox 360, and PC. If you want to check out the opening moments of the final BioShock Infinite DLC, you can do so here. 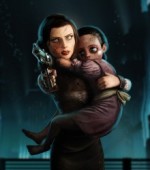