When I first heard about Biomutant, I was skeptical. It was billed as a “post-apocalyptic kung-fu fable,” which sounded a lot like one of those horrible pizzas that the Teenage Mutant Ninja Turtles would order. Every ingredient is fine on its own, but does anyone really want to put a slice of chocolate fudge, sardine, chili pepper, and whipped-cream pizza in their mouth? After getting a demo of Experiment 101’s game at Gamescom, I’m surprised to have had my mind changed so abruptly. Here are five reasons why you may want to keep an eye on Biomutant, too.

Biomutant is weird, and it embraces that weirdness fully
Studio head Stefan Ljungqvist summed it all up when he said, “It’s weird, in a good way.” There are a lot of familiar elements in Biomutant, but they don’t seem unpalatable together like a Ninja Turtle’s pizza. The combat would be at home in any number of stylish-action games. There’s a 16-square-kilometer open world to explore above ground, and an underworld of comparable size. Your raccoon-like character is customizable, from its gender to its body shape to the color and pattern of its fur. You have stats to manage, as well as weapon upgrades, clothing, and special items like electric bullets. Not weird enough for you? How about this: Your character can gain mutagen powers. OK, fine. In the demo we saw him acquire a mutation called “moth mouth” that let him barf out moths. These moths distract enemies and can cause them to attack their friends. It is called “moth mouth.” Let that sink in.

Your actions matter, except it seems like they actually might
Ljungqvist says that one of the team’s goals is to give players a personal ending, based on their actions in the game. For example, early in the game you learn that the tree of life is dying, and that its death could have a drastic effect on the currently lush landscape. Do you choose to help restore its power? You don’t have to, though you may have to live with the consequences. There’s a morality system in the game, and it doesn’t just revolve around you, either. There are six different tribal factions in the game, and when you start the game it randomly determines whether each one will be “good” or “bad” to put it in simple terms. You can choose to align yourself with one or several of these tribes, find a way to unite them, or simply slaughter them all and call yourself kind. Ultimately, Ljungqvist says it’s a quest about personal discovery. Why does your character have an eyepatch? Where did he come from? What’s his name? These are all important mysteries that will Ljungqvist says will be paid off in ways more substantial than a handful of cutscenes that you watch at the end.

The whole thing is narrated
As you play the game, an unseen narrator will occasionally call out what’s happening. In the crafting menu, for instance, we made a long blade, whereupon the narrator remarked, "Looks good to me. Bet it makes a swoosh sound." That might make you think of Bastion, but Ljungqvist says it’s more like the announcer in FIFA. The identity of this narrator is one of the game’s many secrets. Of course, the game was just announced and it’s coming out next year, so there’s a chance it’ll be revealed at a later date. Regardless, it’s a fun addition to the action. It’s built around experimentation
Your character will gain access to a host of mutagenic and psi abilities throughout his adventure, and the game is designed to allow you to incorporate these powers neatly into the blade and bullet action. The left trigger is used as a modifier button to access a second tier of attacks and abilities mapped to the face buttons. Experiment 101 wants players to do some experimentation of their own, finding ways to use telekinesis or chain lightning in combat. When I saw that the main character can get the ability to summon bouncy mushrooms and also telekinesis, I asked Ljungqvist if players could place a mushroom and then telekinetically slam them onto the springy fungus to launch them away or fling them into a pool of deadly oil. The answer? Of course you can, because why wouldn’t you be able to do that?

There’s a big world to explore, and some silly ways to do so
The world is large, and getting around on foot could be boring. Fortunately, you’ll be able to pilot a variety of vehicles, including a mech, hot-air balloon, and mechanical hand that walks around like Master Hand and also shoots enemies by making a gun shape. If fast travel is more your thing, you can unlock points by marking signs. How do you mark them, you ask? Fine. You pee on them.

Biomutant is coming to PlayStation 4, Xbox One, and PC next year. 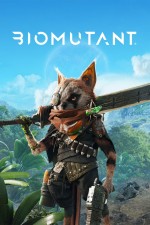