Bayonetta Is A Hairy Girl, But I Still Like Her
by Ben Reeves on Jun 10, 2014 at 02:52 PM
Publisher: Nintendo
Developer: Platinum Games
Release: October 24, 2014
Rating: Mature
Platform: Switch, Wii U Bayonetta's more powerful attacks cause her clothes to fly off her body, but that's not why I like this game; I fell in love with Platinum Game's zany series for its hair raising action (see what I did there?).

Platinum Games' Bayonetta 2 is a Wii U exclusive, and I think that's great news for Nintendo. The original Bayonetta was an awesome action game full of wacky action and off-the-walls antics. During my Nintendo booth tour at E3, I got to play the game, and even though I couldn't hear what was going on, the game proved to be such a visual feast that it didn't matter if it hit all my senses.

The demo started with Bayonetta and her Umbran Witch friend Jeanne getting attacked by a group of robotic horse creatures that looked like they could have been space angels, and considering how ridiculous Bayonetta's story is, I wouldn't be surprised if that's exactly what these were. Bayonetta turned to her friend and said, "It's not Christmas without caviar," and then they started fighting.The story in this game is pretty deep.

I tore through these beasts while on the top of a fighter jet. The demo at the show might have been tuned to easy, because it wasn't highly challenging, but I did get a good feel for the action, which remains tight and precise. Bayonetta strings together a series of combos by mixing together her punch and kick attacks. If you hold down the button, Bayonetta will fire off her guns, and the longer combos turn Bayonetta's hair (which she uses to cloth her body) into giant demonic beast hands that portal out of thin air for a brief second and attack her foes.

After working my way through the monsters on the fighter jet, Bayonetta crashes onto a train and then proceeds to fight a giant dragon creature. As I fought the beast on one of the longest bridges in the world, the train continued to speed along and you can see the city moving in the background – well you couldn't because you weren't there, but I mean "you" as a theoretical you not a literal you (learn to read, pfft). Well timed dodges will activate Bayonetta's witch time power, which slows down time for a short period and allows you to get in a few extra hits. (Sorry for making fun of your reading ability earlier, it was my fault, we should still be friends.)

After whittling down this monster's health, the action shifted to the sky and I eventually finished off the monster by using my hair power to pummel his head into the side of a skyscraper and then summon a dragon that was even bigger than he was who proceeded to tear him apart. Bayonetta threw so many crazy things at me during my demo that I can't even remember them all, so I can't imagine what we should expect to see when the full game releases this October. 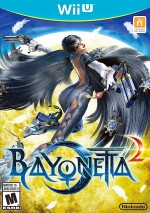