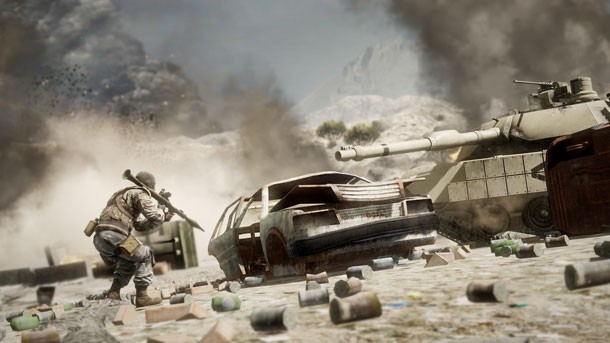 EA and DICE have unleashed Bad Company 2’s multiplayer onto the masses in the form of a PlayStation 3 beta, and we were on the front lines. While the beta only includes one of the maps from the final game, I was more than happy to spend hours testing my skills against the world. I even did pretty well among the insanity. Being a huge Battlefield fan from day one, it was also a great opportunity to answer questions both myself and some of you, the readers have had about the game.

The new map that I played, Arica Harbor, is a long, kidney shaped stretch of land that has the offensive team pushing down a long hill through a fort, urban city, train wreck and finally the harbor. The map contained tanks, Hummers, the new quads and a UAV in the form of a little helicopter that’s flown by the player. Everything that fit like a glove from the previous title returned with obvious improvements. Everything looks better, controls smoother and has overall more polish to a formula that DICE has been perfecting for years across many titles.

First and foremost, this game looks great. Even the draw distance is impressive and you can easily see across the map – which is enormous, I might add. In classic Battlefield fashion, DICE does not play around with tiny little arenas when it comes to multiplayer. The other great improvement is the sound. It may be the most striking thing I noticed during my playtime. The staggering number of things going on means there are a bazillion sounds triggering all around you. Grenades pop with force, sniper rifles crackle, and the in-game characters are chatterboxes. I’m not kidding about that part, and it’s awesome. The amount of dialogue that’s spoke in-game is sheer craziness. Where a game like Modern Warfare 2 will have a guy maybe yell about reloading or make an “ugh” sound when he dies, Bad Company 2 has multiple lines for when a tank is spotted. Check out the side bar to the left for more info.

The game mode I was playing is very similar to the Gold Rush mode in the previous Bad Company, with a few tweaks and now dubbed just Rush. Fans should note that this is not the famous Conquest mode where teams capture flags and knock down team tickets from BF 1942 and BF 2. Instead of boxes of gold to destroy and defend, the points are now called M-COMs, but the feel is pretty much the same. The campy tone to the mode has also been removed and the game feels more serious. This is also obvious when the in-game characters are swearing up a storm.

For those of you that are new to the series, the game plays out as an attack and defend mode. The attackers try and push their way into the defender’s base and take out two objectives by setting a timed explosive and blowing it up. If they destroy both, the battle is pushed forward to another set of points further along the map. The attackers win if all points are destroyed, and the defenders win if they thwart the advance and/or wear down the total number of tickets (lives/respawns) of the attackers.

The weapons and vehicles system is much deeper than the previous game. There are more than before with the addition of things like the quad ATV vehicle or the defibrillators from Battlefield 2, which medics can use to revive a fallen mate. The class system has been totally overhauled and there are now just four:

Each class unlocks its own specialization options but also has a pool of options that any class can use, such as the ability to be lighter and run faster or the option of upgrading the damage dealt by a vehicle when in the driver seat. I counted over 25 specialization options in the beta. The other new option is the ability to mess with the classes a little bit to better fit your style. Some of the secondary weapons like shotguns can be swapped out for any class’s primary weapon. So I was eventually picking Recon with a shotgun and hiding in the bushes for some unsuspecting attacker fools.

Read on to the next page for a Q&A section that includes info on things like going prone, the new kill cam, and more. Also be sure to check out all-new gameplay footage from the beta level as well as screens we grabbed from playing.

One thing that was apparent going into the beta was that I and many others had a lot of questions about how things would play out. So here we go:

Q: Can I go prone yet?
A: Nope. Unfortunately this still is lacking from the later versions of Battlefield games even though it was in Battlefield 2 on the PC.

Q: Speaking of Battlefield 2, is there a Commander role?
A: Also a no, but there are awesome tools like the UAV helicopter that any player can scout enemies with, or even use bring a rocket or two down on their opponents’ heads.

Q: What about squads?
A: Yes! And they’re better than ever. You can now spawn on any of your squad mates via a menu selection. You can also choose whether or not you spawn into a squad in the loading screen before you even get into the game.

Q: So I heard they added a kill cam. True?
A: Sorta. It’s not really a kill camera as it does not actually show how you die, but rather a live feed of the player that killed you. A neat feature is that is shows their leftover health amount so you can see how close you were to besting them in your duel. Unfortunately, it really takes away from something Battlefield has always done best: sniping. This series has some of the best sniping because a player can hide in the bushes a half-mile away from the action and still get kills. The map sizes in other games really prevent awesome, true sniping action, whereas Battlefield has it down. When the kill cam shows your sniping position, the time you spent running the long way around a huge map for a sweet spot is possibly wasted.

Q: Do you still get dog tags for a knife kill?
A: Oh yeah. The bragging rights return! The badges and awards also return for things like Assault Rifle Efficiency or earning certain amounts of kills.

Q: Have they added airplanes yet? I miss those.
A: No go on the airplanes, but there is a new Blackhawk helicopter, ATV quad and – of course – wave runners!

Q: How different in the destruction?
A: Very! Not only can building completely be leveled, but things like cement barriers now chip away more realistically. Thankfully, it’s not actually that easy to completely destroy something so you don’t have players just sitting around with C4 and goofing off. Though that can be fun… 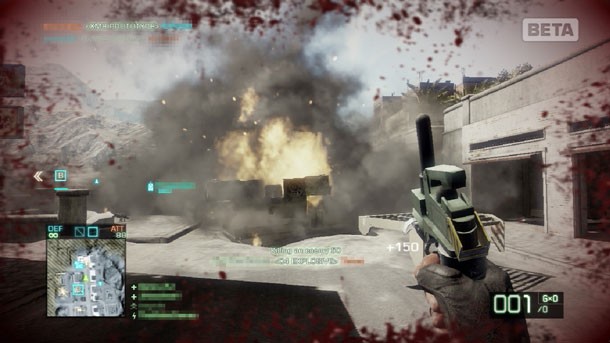 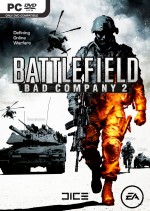