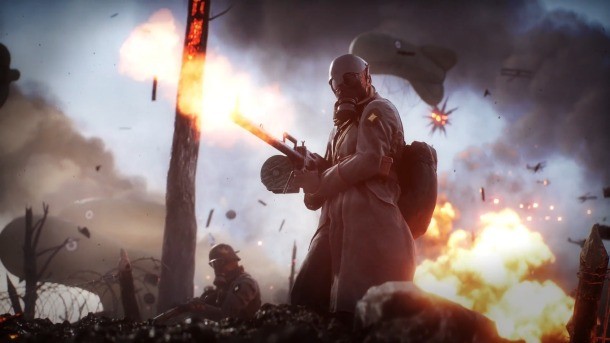 While every other shooter seems content to join the sci-fi arms race, DICE's popular military series took the opposite approach, showcasing global conflict rarely seen in modern media. Battlefield 1 transports players back to the Great War.

Hands-on time confirmed that regardless of the era, Battlefield 1 plays much like its predecessors. Squad-based air, land, and sea battles operate as the centerpiece experience, but within those parameters DICE refining, innovating, and experimenting with new concepts. Here are a few we discussed with senior producer Aleksander Grondal.

Mixing Up The Squads
Squad play is a critical component to the Battlefield experience, so DICE is always analyzing how the different classes work in concert with each other. For Battlefield 1 the team is making some significant changes. Gone is the popular engineer class, which primarily focused on vehicle attacks and repairs. The anti-vehicle weapons are now a part of the assault class' repertoire, and medics now wield the repair tools.

Battlefield 1 also introduces two new classes – the tanker and pilot. Players automatically become one of these classes when you spawn into a plane or tank. When in the field each uses a carbine rifle, and both also have repair tools. Grondal says they have other unique gadgets as well that DICE plans to reveal later.

The infrastructure for teamplay is also getting revised with the new "permanent squads" feature. After setting up a permanent squad you no longer need to reform your squad after dropping out of a match. You can simply jump around from server to server with your group intact.

Battlefield 1 has no commander mode, but increased point rewards for teamplay should also drive more players to squad up instead of going lone wolf. If they follow squad orders when prompted, the squad will get more additional bonus points than in previous Battlefield games. In early playtests at DICE, Grondal says they noticed more people requesting squad orders than ever before because they wanted those extra points. General teamplay actions are also being rewarded more, so if you want to get to the top of the scoreboard you need more than a boastful kill-death ratio.

Renewed Commitment to Destruction
Ever since DICE brought destructibility to Battlefield with Bad Company, the studio has tinkered with its approach. Bad Company 2 let you level entire buildings, while subsequent entries toned down the destructibility in favor of more microdestruction opportunities and the set piece "levelution" moments. With BF1, DICE is pushing destruction on a grander scale again.

"What we want to do is allow you to destroy all the things you think you should be able to destroy, to a point," Grondal says. "You can’t just level everything. It’s not fun anymore. It just becomes open ranges and people are just shooting at each other from a distance. There must be some solid objects left for gameplay."

The trailer showcases a bi-plane crashing violently into a windmill, tearing the structure apart. That will actually happen if you kamikaze your plane in a multiplayer match.

You can fly a bi-plane into the windmill like we saw in the first teaser, and it will crumble appropriately.

A New Approach To Weapon Balance
In Battlefield 4, the classes had lots of general overlap, with a general pool of weapons giving players access to popular guns like DMRs regardless of the class. DICE is changing directions to create more differentiation between the weapons each class uses in Battlefield 1. The dev team is tweaking weapon ranges to make each more distinct.

"You couldn’t feel the differences between so many weapons in Battlefield 4," Grondal says. "We want players to make gameplay choice about the weapons." With the new distinct performance among weapon classes, Grondal says it makes squads depend on each other much more than in previous games.

DICE also want people to get more up close and personal in this game. The new bayonet charge is one way to bring enemies closer together. While sprinting, triggering a melee attack gives you an extra boost of speed to close the gap and bury your bayonet in the enemy. You still get dog tags should you successfully take out an enemy with a sneak attack.

Tweaked Progression System
Riffing off a concept introduced in Battlefield Hardline, as you rank up in Battlefield 1 you receive war bonds. These rewards can be spent on new weapons, attachments, and gadgets. Unlike Hardline, however, you can't just buy whatever upgrade you want. First you have to play the class and unlock the opportunity to buy the weapon, and then you can use the war bonds to make the acquisition.

DICE plans to include more personalization options for your weapons as well, but decided against customizable uniforms. Battlefield 1 lets you play as six different armies in multiplayer, the most ever in a Battlefield game. DICE feels it is more important to distinguish between enemy and teammates than to let people run around in unique armies. The six armies are the British Empire, German Empire, United States, Ottoman Empire, Austro-Hungarian Empire, and Kingdom of Italy. DICE mentioned they have room for bringing in new armies as well down the line.

Medals, badges, etc are returning as well with new twists DICE will reveal in next couple months.

Chemical Warfare
It wouldn't be a World War I game without chemical weapons. These monstrous weapons played a critical role in trench warfare, and appear in the form of poison gas in Battlefield 1. This gas is weaponized in many ways; it can be thrown as a grenade, dropped from a plane, or deployed from a tank should infantry get too close to your vehicle.

When you see a gas cloud, you better stay clear or put on your gas mask. All classes have gas masks available to them at any time. You lose peripheral vision with the gas mask on, and you can’t aim down scopes or ironsights. This creates a risk/reward element to using it.

New Multiplayer Mode
We got hands-on time with the classic Conquest and Domination modes, but DICE also announced a new mode called Operations. This long-form experience introduces a sequence of battles that take place across an entire front. Inspired by the operations that actually took place in WWI, attackers try to push defenders out of an entrenched position. If you do so, your team advances to the next map in the sequence, with the ultimate goal of pushing the defenders all the way back to their base of operation.

DICE wouldn't talk about rush or any other modes beyond Conquest and Domination, but confirmed that all game modes are being designed with their own tweaks done to the maps.

Game-Changing Vehicles
Battlefield 1 introduces new "behemoth" vehicles that can quickly turn the tide of a battle. The announced behemoths include a zeppelin, armored train, and a 200-meter long dreadnaught battleship.

Behemoths work differently in each game mode that incorporates them, but for conquest it comes in as a reinforcement for the team that is lagging behind. “We feel that Battlefield matches are most fun when they are really close, when one team doesn’t completely steamroll the other, so bringing that in and help the losing side get back on their feet is the idea,” Grondal says.

DICE is still tweaking the exact time the losing team is granted the behemoth, and plans to monitor how players use them in the upcoming alpha and betas.

New Approach To Campaign
With the exception of Bad Company 2, DICE has typically struggled to create a compelling single-player campaign. With Battlefield 1, the studio is taking a new direction that abandons a linear story in favor of a collection of scenarios taken from across the timeline of World War I. "The way we wanted to do it is to bring more Battlefield into it," Grondal says. "More vehicles, more variety, more agency, more openness. Battlefield has always been about being multiple, different soldiers all around the world, so that’s kind of what we’re doing here as well. You can really get some unique perspectives if you play on different sides."

The sequences may be distinct, but they are also connected, with a clear beginning and an end. Grondal says you will even play along other factions than those featured in multiplayer.