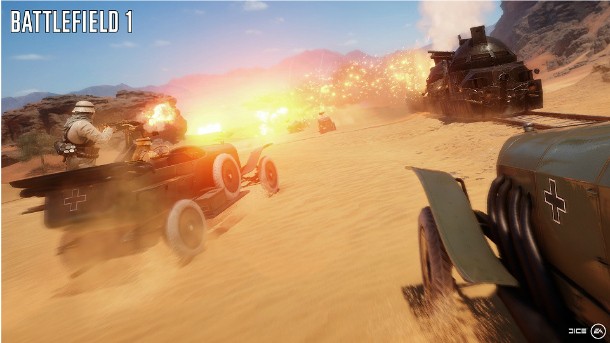 Fans hoping to get their hands on Battlefield 1 before October are in luck, as the game will host an open beta across all available platforms at the end of the month. You can also get a taste of what will be included in the beta with a brand new trailer.

The open beta for Battlefield 1 begins on August 31 for PlayStation 4, Xbox One, and PC players. Early access will be awarded to those who sign up for the game's insider newsletter, on the official website. Additionally, the Gamescom trailer introduces a brand new map, classes, and vehicles. See these features in action for yourself below.

Featured in the trailer, the Sinai Desert  map serves to introduce players in the beta to horses, swords, and the armored train that can be used in battle. The beta will support 64-player matches in Conquest and Rush modes. Battlefield 1 will be playable at Gamescom this week, and streamed on the official Battlefield Twitch channel.

Battlefield 1 hits PlayStation 4, Xbox One, and PC on October 21. For more on the game, get familiar with the available weapons, and the changes it offers.